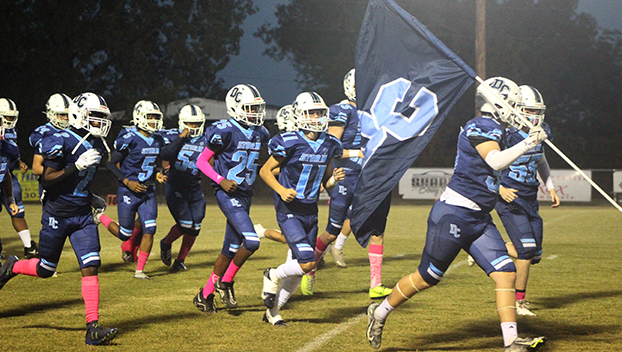 FERRIDAY — The Delta Charter Storm will look to get back in the winning column on Senior Night, but it will not be easy as they take on the Delhi Charter School Gators Thursday night in a pivotal LHSAA District 4-1A game for both teams.

Kickoff between Delhi Charter (7-1, 3-0) and Delta Charter (4-3, 2-1) is scheduled for 7 p.m. The Storm lost a heartbreaker on the road to Delhi High School 40-38 while the Gators took care of Block High School on the road 52-8 to take over first place in the district standings.

Delta Charter has seven seniors on its varsity football team and they will be honored before kickoff. At least that’s when head coach Blake Wheeler said that will happen.

As for what the Storm will be working on in this short week of practice to prepare for one of the best teams in Class 1A in the Gators, Wheeler said, “Basic fundamental stuff. Just make sure we’re tackling the way we’re supposed to. And blocking. And not turning the ball over.”

Not only did Delta Charter lose the game late in the fourth quarter, but the Storm also lost junior starting quarterback/free safety Juvari Singleton in the second half. That had a big effect on the team on both sides of the ball, which allowed the Bears to rally for the win.

“Our quarterback went down late in the third quarter with an ankle injury. That really hurt us moving the football. He also plays on defense.,” Wheeler said. “We had our chances to win. We didn’t make enough plays at the end of the day.”

Wheeler said late Monday morning that he didn’t know if Singleton would be able to play Thursday night with it being a short week.

“He’s been able to get treatment over the weekend. I tend to say he probably won’t play. I don’t know that yet,” Wheeler said.

If Singleton isn’t able to play, junior Ron Ellis Jr. would take the snaps under center for the Storm.

“He plays receiver for us, but he’ll be able to slot in for us,” Wheeler said.

As to what concerns him the most about the Gators on both sides of the ball,” Wheeler said, “They’re a good combination of speed and size. Offensively, they’re big and physical. Their running backs run really hard, as well as their quarterback. Their defense tackles well. They’re fast and good size. They’re a really good team. They’re well-coached. They’re definitely going to pose a big challenge for us.”

In addition to Ellis Jr., Wheeler said that Delta Charter’s defense will have to step up if the Storm is to upset the Gators and stay in the district championship picture.

Wheeler said the determining factors in the outcome of this game could boil down to turnovers and fundamental football.