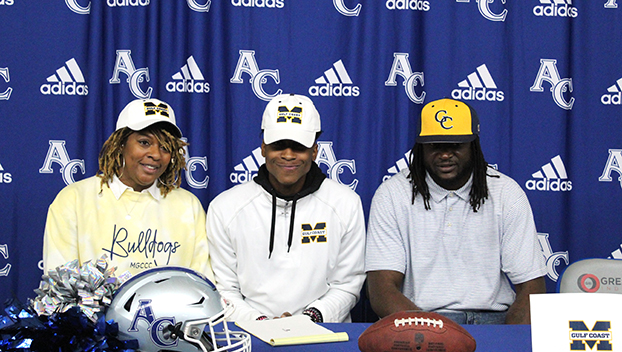 PERKINSTON — It doesn’t get any bigger in the regular season than Mississippi Gulf Coast’s White Out regular-season finale Thursday against No. 4 Jones.

The Bulldogs are in a must-win to make the MACCC postseason, and a win earns them their fourth-straight South Division title. They would get the No. 1 seed from the South and earn the right to host a semifinal game.

“Everybody in the building knows it’s a big game, so it doesn’t really need to be discussed that much,” Gulf Coast coach Jack Wright said. “It’s a big game. I’m sure they’ll be prepared to play, and I’m sure we will, too. It’s two really good teams fighting for a win.”

Natchez native DK McGruder, who played baseball and football at Natchez High and Adams County Christian School, will look to leave a mark on the game. The freshman defensive back has recorded 11 tackles over the course of the season.

Kickoff at A.L. May Memorial Stadium is set for 7 p.m. The game will be streamed at https://mgcccbulldogs.com/watch. White Out T-shirts, which are also honoring Breast Cancer Awareness Month, are available at Gulf Coast Bookstores.

The only other path to the playoffs for the Bulldogs would be if Pearl River loses Thursday to winless East Central. Gulf Coast would win a two-team tiebreaker with Hinds, if the Eagles beat Copiah-Lincoln.

“They have a really good defense,” Wright said. “They’ve been tough to move the ball on for everybody this year. They tough against the pass because they’re got a really good set of DBs who don’t give up a lot of big plays. They’ve also run the ball very efficiently. They have a great running back who’s a tough, downhill runner who also makes explosive plays. That’s a winning combination.”

Robert Henry leads the country with 17 rushing touchdowns and by averaging 135.1 yards per game. The Jones defense leads the MACCC in total defense (240.5 yards), which ranks ninth in the country.

The Gulf Coast pass-and-catch combination of Pat McQuaide (Fr., Solon Ohio/Solon) and Keymari Odum (So., Haines City Fla./Ridge) leads the country in three categories. The thrower is averaging 258.0 yards per game and has thrown 18 touchdowns, while the catcher has 744 receiving yards. Odum is second in touchdowns receiving with eight, one behind Northwest Mississippi’s D.T. Sheffield.

Gulf Coast has the nation’s 20th-ranked defense, the fifth-best in the conference. One of the Bulldogs’ leaders is sophomore linebacker Drake Thornton (So., Gautier/Gautier). He’s second on the team in tackles with 53, and he has five tackles for loss including a sack.

A passionate player, he’s also got a fumble recovery to his credit.

“Drake took a year off in 2021, which is not always an easy thing to come back after not playing,” Wright said. “He’s had a great season. He’s second on the team in tackles. He plays with a lot of energy. He’s a really fast football player. I’m just proud to have him on the team, and we need his continued leadership.”

WHERE: A.L. May Memorial Stadium, Perkinston