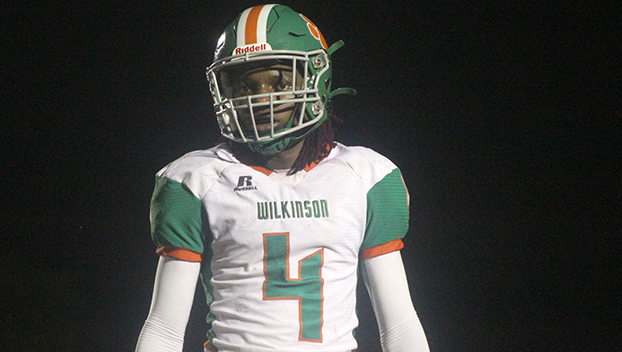 Cordarious Tolliver is a sophomore wide receiver for Wilkinson County. He looks to help send the senior Wildcats out on a high note in their regular season finale Thursday night. (File Photo)

Kickoff for this MHSAA Region 7-3A showdown between region champion Jefferson County (6-2, 3-0) and Wilkinson County (0-9, 0-3) is slated for 7 p.m. While the Tigers will look to finish Region 7-3A undefeated and carry momentum into the playoffs, the Wildcats want to send their seniors out with a victory over a very good team.

The Tigers took care of Tylertown High School at home 34-0 last Friday night to clinch not only the region title, but the No. 1 seed out of Region 7-3A for the Class 3A South State Playoffs, which start next week. Meanwhile, the Wildcats lost their homecoming game to Franklin County High School 26-6 last Friday night.

Wilkinson County first-year head coach Christopher Brown said a win over a good Jefferson County team on the Wildcats’ Senior Night would be good for his team.

“It’d be huge. It would give us a little momentum going into the offseason. Hopefully, they’ll learn from this past season,” Brown said.

With it being a short week of practice, Jefferson County head coach Roderick Holmes said it didn’t take long for his players and coaching staff to get past its win over Tylertown and get ready for Wilkinson County.

“Like all victories, or losses, they celebrated shortly. They had a little time to celebrate. After that, we already prepared for (Wilkinson County),” Holmes said.

As for what the Tigers will be working on in practice this week to prepare for the Wildcats, Holmes said, “As always, cleaning up the base stuff that we do. If we clean up all our base plays on offense and defense, it will allow us to play much faster and move on to what we do defensively and offensively.”

Brown said practice at Wilkinson County will be the same this week as it has been all season long.

“We’re trying to work on ourselves. Working as a team. Just the basic things — fundamentals and keeping it simple,” Brown said.

Even though Wilkinson County is winless this season, Holmes noted that there are a few things about the Wildcats that concern him.

“Just as in the wild, a wounded animal is the most dangerous animal. We respect all our opponents, whether it’s Tylertown, or Hazlehurst, or Natchez,” Holmes said. “Offensively, they’ve got the running game. Again, our guys are already locked in and focused. So we’re going to try to take away what they do best. Defensively, they’ve got pretty nice size. Their guys are kind of long and rangy.”

As for what concerns him most about the Tigers on both sides of the ball, Brown said, “Offensively, they like to throw the ball a lot. Covering those receivers. They’ve got a good group of receivers. Find a way to get some pressure on their quarterback so he won’t have time to get it to his receivers. They have some good athletes on the outside. Defensively, they’re fast and fierce. All 11 try to get to the football at all times. They play together.”

What Wilkinson County cannot afford to do if they are to upset the Tigers is turn the ball over. In their loss at home to Franklin County last week, the Wildcats turned the ball over four times. They were also held to 106 yards of total offense and were 1-for-9 on third down.

Holmes said the X-factor in this game will be the Tigers’ running game — something the Wildcats could not contain last week as their defense gave up nearly 200 yards on the ground to the Bulldogs.

“If we’re able to run the ball, I think we’ll be set offensively,” Holmes said.

Brown said the X-fact could be the Wildcats’ offense as a whole. He added that he would like to see his offense stay on the field longer to give their defense some much-needed rest on the sideline.

“Better offensive line play. We just need to try to find a way to put a complete game together,” Brown said. “Our defense has played well. I haven’t been able to get the offense going this season. Our defense has been on the field way too much this season.”