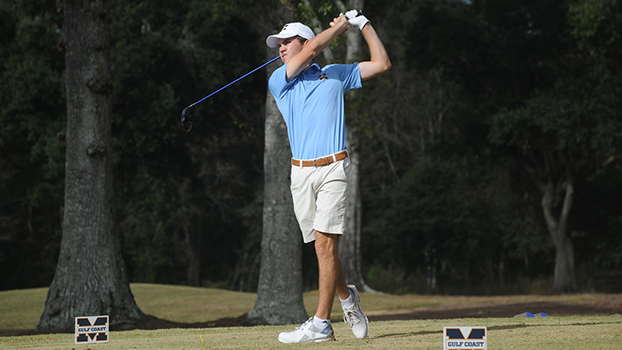 SAUCIER — No. 9 Mississippi Gulf Coast concluded a dominant fall with another runaway victory Tuesday, blasting the field at the MGCCC Fall Invitational by 32 strokes at Windance Country Club.

The Bulldogs finished 11-over to easily beat Copiah-Lincoln, with No. 6 Meridian another nine shots back. Gulf Coast was led by Chase Kaiser (So., Natchez/Cathedral), who won the event for the second straight year.

“It’s another day where we were able to come out and take care of business,” Gulf Coast coach Brad Thornton said. “Obviously, in the big picture we come away with the win. I was very excited about that. I’m very pleased with our consistency throughout the week, and I look forward to trying to get ready for the spring now.”

Kaiser needed a playoff hole to beat Co-Lin’s Alex Navarro. They finished as the only two golfers in the field under par after 54 holes, tied at 3-under. After returning to the 18th tee, Kaiser admitted his nerves might have gotten the better of him. He came over the top of his tee shot, hitting it low and left on the par-4.

“Luckily, out of bounds is extremely far left, so I was able to play it,” he said. “I had a good lie, and it was about 215 (yards) in. I knew if I just carried the bunker, it was an easy up-and-down from the right side. I left myself an easy chip over there.”

Navarro’s tee shot was right down the middle of the fairway, but he missed the green left. He chipped past the hole and missed his par putt. Kaiser didn’t, and the Gulf Coast sweep was complete.

The Bulldogs had three players on the five-man All-Tournament Team. Will Burnham (Fr., Jackson/Jackson Prep) finished third at 2-over, and Andrew Zielinski (Fr., Ocean Springs/Ocean Springs) was tied for fourth at 5-over.

Jackson Wise (Fr., Pontotoc/North Pontotoc), playing as an individual, was another shot back tied for sixth and Alessio Graziani (So., Johannesburg, South Africa/Beaulieu College) was 8-over, giving Gulf Coast five of the top eight.

The Bulldogs, who previously had swept the three MACCC fall events, start spring competition Feb. 6-7 in the Pearl River Invitational at The Oaks in Pass Christian.