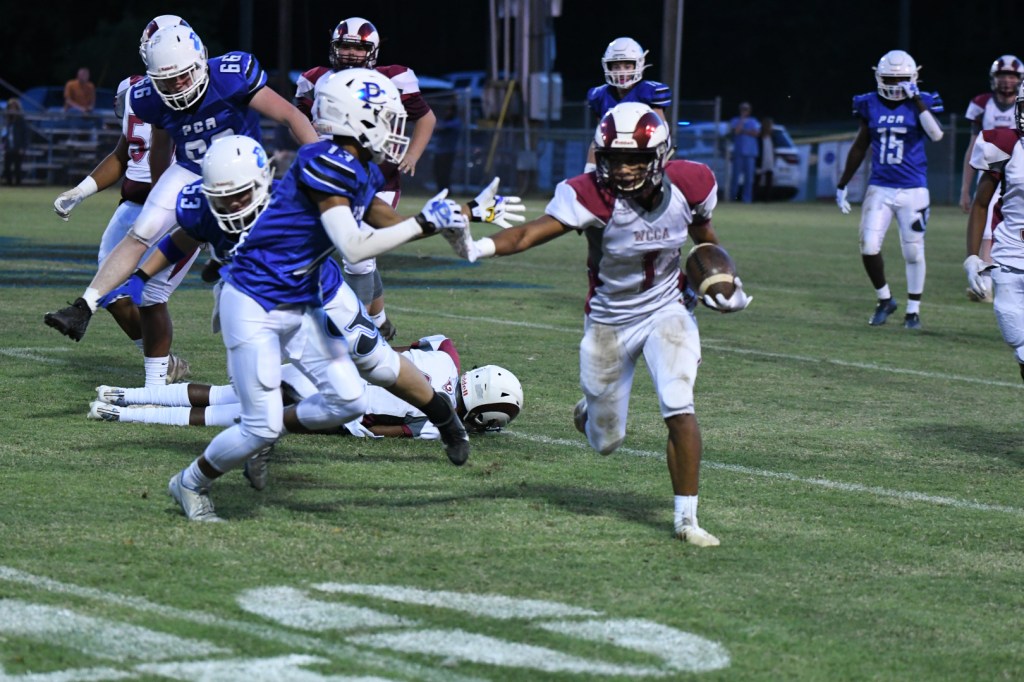 Rams running back Ryan Fisher could make the biggest impact for the Rams Friday night in the first round of the playoffs. (Travis Murray | Special to The Natchez Democrat)

WOODVILLE — Three weeks ago, the Wilkinson County Christian Academy Rams defeated the Riverdale Academy Rebels 36-12 on Senior Night at WCCA in what was a big game for both teams in MAIS Eight-Man District 3-1A.

That win by WCCA would force a three-way tie for first place in district play with Riverdale and Tensas Academy. Tensas Academy was awarded the highest seed in the Class 1A Playoffs and first-round bye via its win over WCCA while the Rams earned the No. 4 seed and a first-round bye by having the most power points outside the three district champions.

Riverdale will look to seek revenge against WCCA, but once again the Rams will play host to the No. 5 seed Rebels on an even bigger stage at 7 p.m. Friday in the quarterfinals of the MAIS Eight-Man Class 1A Playoffs.

“It’s going to be a good team twice. Especially when you’re evenly matched,” Rams head coach Randy Holloway said. “And the key to the game will be to limit the mistakes and turnovers and control the trenches. And be able to run the football. We ran the ball with great success last time and we look to do that again.”

The Rams had 210 total rushing yards. Ryan Fisher led them with 132 yards and two touchdowns on 20 carries while Jack Orgeron had 10 carries for 46 yards.

While WCCA (7-3) had last week off, Riverdale (9-1) was scheduled to host No. 12 seed Sharkey-Issaquena Academy in a first-round game last Friday night. However, the Rebels won the game via forfeit 18-0 to advance to the quarterfinals.

“Sharkey-Issaquena had a sickness. They had a flu bug,” Holloway said.

This will also be the first game for the Rams since their win over the Rebels. WCCA was scheduled to play at Discovery Christian School on Friday, Oct. 21, but the Lions didn’t have enough healthy players to field a team, giving the Rams an 18-0 forfeit win.

Holloway said while the time off can be beneficial for players recovering from injuries, bumps and bruises, having three total weeks off can also be a detriment. And that’s something he hopes does not derail the Rams.

“One week is standard, but being off two weeks of games and three weeks can have a mental weakness,” Holloway said. “It’s hard to keep your team focused and in shape for three weeks.”

As for what WCCA has been working on in practice during this time, Holloway said, “We’ve been running a lot of defensive and offensive reps. And staying in shape. Physical shape.”

In their first meeting, Riverdale was held to just five first downs and 177 yards of total offense. WCCA’s defense picked off quarterback Ryder Huddleston three times. And this was a team Holloway said was averaging about 50 points a game heading into that match-up.

“Defensively, we controlled the line of scrimmage and we tackled well. I now we had three interceptions. We led the game in takeaways. When you lead in takeaways, you’re going to have a good result,” Holloway said.

Meanwhile, the Rams racked up 374 yards of total offense and 15 first downs. They scored 23 points in the game-changing second quarter. Jacob Sessions was 5-for-7 passing for 164 yards and three touchdowns. Two of those went to Fisher, who had three receptions for 144 yards.

As for who for WCCA will need to step up and have a stellar performance in the rematch Friday night, Holloway said, “Our offensive line. And Ryan Fisher and we’ll have to have steady quarterback play from Jacob Sessions. And we need to have another stellar performance from our defense.”