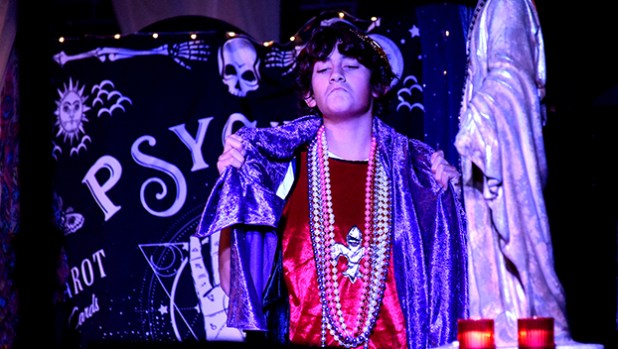 Keaton Ross acts as a mute servant in a Natchez Festival of Music and Mississippi Opera show called “The Medium.” (Ben Hillyer | The Natchez Democrat) 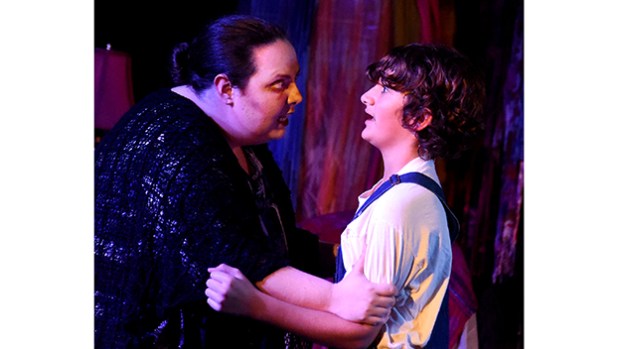 Myka Murphy grips Ross in an intense scene of the opera. (Ben Hillyer | The Natchez Democrat) 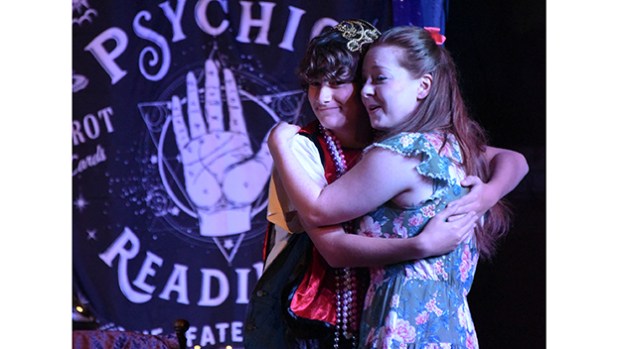 NATCHEZ — An Adams County Christian School 8th-grader had his debut performance in the professional acting world at an opera hosted last weekend in Natchez and Jackson.

Keaton Ross, the 13-year-old son of Leslie Parker and Jeffrey Ross, is a teen of many talents. He can draw, act, sing and also does unique voice impressions—including a spot-on impersonation of a trumpet.

His vocal talent impressed his drama club teacher, Malori Giannaris, who recommended Ross when she was approached by the Natchez Festival of Music and Mississippi Opera to fill an open spot in two short operettas, The Medium and Gianni Schicchi.

Ross, who is no stranger to the stage, started performing in plays when he was 10 or 11 years old but was never nervous about it until last weekend, he said.

“At first I was really nervous about it,” Ross said, adding he has never before acted in two different plays at the same time.

Luckily, his first character portrayal in “The Medium” was a mute servant who has a tragic end.

Ross had to learn to act using only his facial expressions and body language, which came naturally to him.

“I didn’t know how many lines I’d have to memorize but as it turns out it was easy,” he said.

His second character was an “annoying child” who only wants to go trick-or-treating on Halloween but instead is forced to stay in because his family is plotting a wicked scheme.

In this play, Ross has a singing line in an Opera, which is adapted from its original version to be set in 20th-century Mississippi and is sung in English.

“He has the ‘it factor,’” Giannaris said. “He has so much natural talent.”

Ross said performing in an opera is very different from the plays he is used to at ACCS and Natchez Little Theatre. The hardest part, he said, was learning to syndicate his movements with the sounds played by a live orchestra.

After his performances in the operas at Natchez City Auditorium and Duling Hall in Jackson, Ross received an offer to join Mississippi Boychoir.

Ross said he has many hobbies related to art and no interest in sports. In recent years, he played Mike TV in Willie Wonka Jr. and one of the palace guards in Aladdin Jr. He also enjoys drawing and comedy and partakes in the AC’s Got Talent show as a ventriloquist.

“It’s easy,” he said. “You just have to open your mouth just enough to say words without moving your lips.”

He also had a role in Lady B’s Christmas Spectacular at the Natchez City Auditorium last year.

“He’s like a Jack of all trades,” said Parker. She and Ross thanked Giannaris and Jay Dean, Ph.D., who serves as Director of the School of Music at the University of Southern Mississippi and is involved with the Natchez Festival of Music, for giving Ross the opportunity to perform in a professional capacity and connect with several people in the performing arts.

“He now has more connections than I do,” Giannaris said with a smile.

Ross earned a bit of spending money with his performances, which he plans to use to buy an oculus, a virtual reality gaming system. When he finishes high school, Ross said he plans to go to college and hopefully become a paleontologist, dig up dinosaur bones and discover new species of dinosaurs, “because there’s no way that we’ve discovered them all,” he said.

When asked if he plans to continue acting in college, Ross said, “Absolutely.”