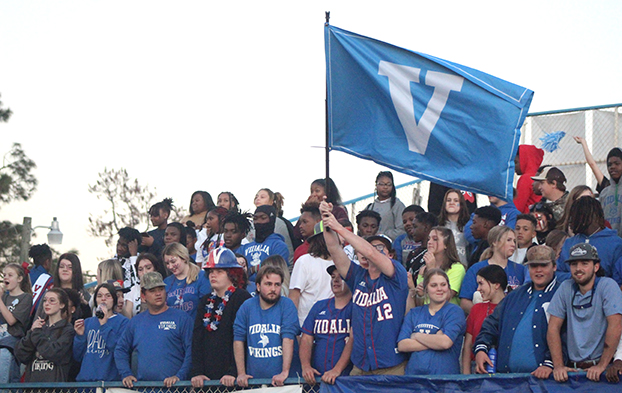 A win Friday night could help the Vidalia Vikings maintain their playoff hopes. They have a tough series of matchups ahead with General Trass the following week. (Hunter Cloud | The Natchez Democrat)

VIDALIA — The Vidalia High School Vikings end their regular season this Thursday night and their opponent on Senior Night is one of the best teams in LHSAA District 2-2A in the Oak Grove High School Tigers.

Vikings head coach Michael Norris said Oak Grove will bring its A-game and his team will have to match the Tigers’ physicality and toughness. If not, it could be a long game for Vidalia.

While Oak Grove was in Class 1A, the Tigers were one of the perennial contenders for the state championship. They won it all in 2019 and 2020, but were eliminated last year in the third round by Logansport High School, 22-14.

“They were one of the top teams in Class 1A. It seemed like they were in New Orleans all the time,” Norris said. “They came up from 1A and they have not missed a beat since they moved up to 2A.”

And that physicality on each side of the ball that Oak Grove possesses is what concerns Norris the most.

Before the game takes place, Norris said that 10 seniors on the football team, one senior manager, and two senior trainers will be honored. He added that it would mean everything for them to win their final regular-season home game against a good Oak Grove team.

“It would show them how far they have come as a team and that they can compete with anybody,” Norris said.

As for what the X-factor in this important district game could be, Norris said, “Whoever controls the line of scrimmage.” He noted that the Vikings’ offensive line did a good job of that in their win over the Madison Jaguars. He then said, “That’ll be a much tougher task against Oak Grove.”

Norris then said something unique when asked who Vidalia will need to step up and have a big game if the Vikings are to upset the Tigers: “Anybody who wears a Vikings uniform on the field needs to step up.”

If the offensive line can contain the Tigers up front, that would mean quarterback Sema’J Hayes as well as running backs Jalin Moody and Kabari Davis could have big-time performances. The defense will need to contain Oak Grove’s high-powered offense to give Vidalia a chance in the fourth quarter.