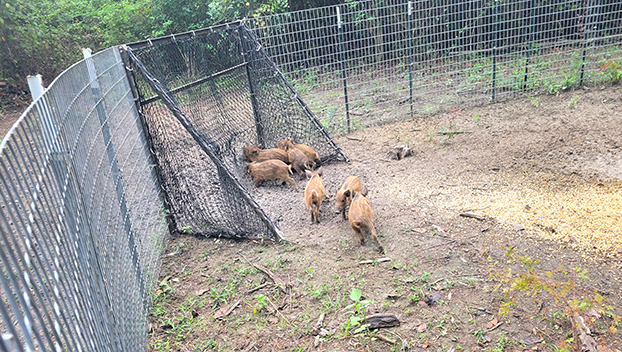 Creel is one of those people who found himself at the mercy of wild hogs. Instead of being a farmer, Creel is a deer hunter who stood at the edge of a food plot astounded by the destruction they had caused. One of his friends who is a farmer sees about $100,000 in damages each year and tries to leave a ring of corn around his fields to protect the crops to no avail.

LSU’s Ag Center reports $66.2 million damages to crops occur annually from hogs and $24.9 million in other expenses such as replanting or replowing a field in the state. Creel’s friend had to replant a field three times this year.

Creel has since developed a gate for hog traps which allows hogs to enter and not get out. No cell phone or remote control is needed to trap the hogs and people can sleep peacefully as the hogs do the work itself. It is important to him to fight the wild hog population in Louisiana with the gate.

“I think if you don’t pursue them with everything you got they will destroy everything you have,” he said. “I was looking at the property and this idea just came to me. It hits you over the head and shocks you. I thought ‘wow that would work’ and my eyes must have been big. I couldn’t go to bed. I had to draw it out on paper.”

Creel says the US Patent Office issued a provisional patent for the gate and his company C&C Hog Gates started selling them in March. Right now, they are working towards getting a full patent. This would protect Creel’s idea and prevent people from stealing their gate and selling it.

His gate is more of a mesh net which is slowly dropped to get the hogs accustomed to the trap before they eventually have the mesh all the way down to the ground. A hog roots its way into the trap to eat the corn bait and tries to leave but cannot, as a hockey goal shaped gate prevents an escape.

One video on his YouTube page shows hogs running head-first into the mesh and trying to escape, but they are unsuccessful. Creel said to date they have trapped about 200 hogs and only three have managed to escape. He said hogs can do some pretty incredible things, citing a 75-pound spotted sow who figured out a way to work her head under the net by backing up with it. Two other hogs have done that with the trap, but for the most part the hogs are unable to get out. He said he realized some of the hogs are just smarter than others, but for the most part the hogs are unable to escape. It was a surprise because he figured their teeth and tusks might be able to chew through the netting, it has yet to happen.

Creel’s hog trap is non-invasive wildlife friendly. Raccoons are able to climb in and out of the pen and deer are unable to walk in once the net is completely lowered to the ground. Bears have yet to walk in although Creel suspects they could climb out if they did.

“I knew the trap was going to work, but watching it work shocked me. I didn’t know how strong it would be but we caught 25 hogs on the first night,” he said. “The first night I watched it all unfold on camera. They walked in around 8 p.m. and by sunrise we had a trap full of hogs. We ease up to the trap that day. Three big hogs were in there about 250 to 300 pounds and they were jumping head first into this net and it would shoot them back like a slingshot. We started dispatching them and about 10 hogs broke to the other side and took out the fencing and escaped. Out of the 25, 15 were killed.”

Since then, Creel and his team have learned to make the pen stronger as a big group of hogs can get tricky. The biggest hog he has caught was a 350 pound boar who spent about 16 hours trying to escape.

Once hogs are dispatched, the meat is donated to people to be consumed. Wild hog meat is safe to consume. Creel said when he knows he is about to capture a group of hogs he starts calling around to see who wants to take them.

“All of the good eating hogs we find a home for,” he said. “One guy will take 19 or 13 at a time and process them to donate to people in his community. It helps people out with meat.”

About 70 percent of the wild hog population has to be removed from the environment to keep population rates level, and it has become his mission to help eliminate their threat.

“I have enjoyed catching these hogs because it is a challenge to out smart them. I have enjoyed it, I think feral hog trapping will keep growing as a business,” he said. “On our hunting property I have caught 59 hogs and they keep coming. As a deer hunter, if you have hogs on your property you have more problems than one. They root up your food plots, tear up your feeders and destroy the natural browse for deer. If we don’t fight this hog problem it will be bad.”

Learn more about the gates at www.C&CHoggate.com or on Creel’s You Tube channel.