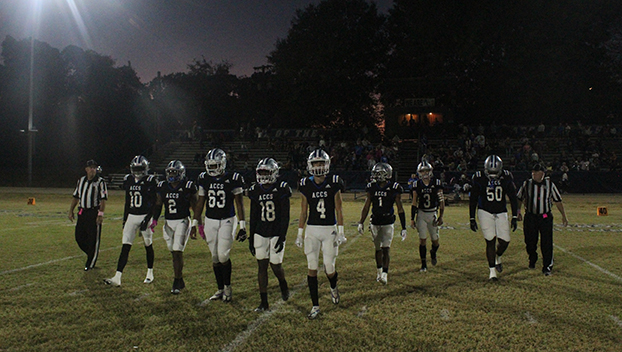 The AC football team walks into the MAIS 4A Playoffs fresh off of a bye-week and will look to advance past Winston Academy Friday night. (Hunter Cloud | The Natchez Democrat)

NATCHEZ — Adams County Christian School’s varsity football team returns to action Friday night when the Rebels play host to Winston Academy in the quarterfinals of the 2022 MAIS Class 4A Playoffs.

Kickoff between the No. 8 seed Winston Academy Patriots (6-5) and the No. 1 seed ACCS Rebels (10-0) at Bobby Marks Stadium is slated for 7 p.m. While ACCS had a first-round bye last week, Winston Academy defeated No. 9 seed Marshall Academy 36-0 last Friday night.

Even though the Rebels earned the first-round bye as the District 3-4A champions to get over some nagging injuries as well as bumps and bruises, assistant coach Matthew Freeman said it did affect them mentally not having a game to get ready for.

“Mentally, it threw the kids off their routine. Not having a game, we had to do something different for a week,” Freeman said. “Physically, it helped our bodies. Playing a four-quarter game, it gave us a week of rest and recovery.”

However, ACCS will be without senior wide receiver/linebacker Hayes Marchbanks, who suffered a dislocated hip early in the third quarter of the Rebels’ win over Riverfield Academy two weeks ago.

“Hayes will be out. He had just got back from another previous injury. We will miss his senior leadership. Hayes will be missed on the field,” Freeman said.

As for what the Rebels are working on in practice this week to get ready for Winston Academy, Freeman said, “We’ve been fine-tuning some stuff. We’re not changing a lot from what we’ve been doing. See what happens.”

While the Patriots are not the biggest team that ACCS has faced this season, they do possess some speed on offense and that could pose a problem for the Rebels’ defense. Defensively, they run different formations and coverages.

“They’ve got some really good athletes. They’re fast. On offense, they’ve got a couple of really good running backs and a good quarterback. They don’t have one guy we can key on. They have several guys we have to stop,” Freeman said. “On defense, they run man-to-man, cover-2, cover-3. They blitz a lot with their linebackers. So we’ve going to have to pick up their blitz.”

As for what the X-factor in the game would be, Freeman said, “What team can handle the playoff pressure the best.”

Freeman noted that several players on offense and defense will have to step up and have a big game for the Rebels to emerge victorious and advance to the Class 4A Semifinals.

“We’re going to have to have a big game from Dantavios Stampley and Connor Aplin at linebacker and offensively, (quarterback) Coleman Carter, (wide receiver) Jordan Berry, and (running back) Terrell Tenner. Special teams will also play a significant factor,” Freeman said.