Tickets going fast for Angels on the Bluff tours 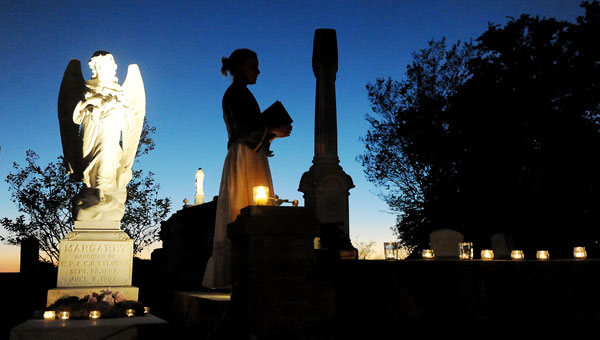 File photo | The Natchez Democrat — Chesney Petkovsek plays the role of Margaret Stewart during the annual Angels on the Bluff cemetery tour. Stewart died tragically at the age of 17 in 1907. Her parents arranged for an elaborate funeral at the time of her death.

NATCHEZ — The opening weekend of the annual Angels on the Bluff tours of the Natchez City Cemetery is completely sold out, but there are still some time slots open this Thursday and the following week.

Tours on Saturday, Nov. 12—the last day of the event for this season—are almost completely sold out as well, so those interested in going should act quickly.

Co-chaired by Pokey O’Beirne and Catherine Ratcliffee, Angels on the Bluff is a popular event that raises funds for the preservation of the historic city cemetery. It provides a fascinating insight into the lives of cemetery residents with storytelling from actors dressed for the part.

“It’s a magical experience to walk through the cemetery when it comes to life at night illuminated by lights and candlelight,” Ratcliffe said. “I’m always overwhelmed by how beautiful it is.”

This is the first year the event has spanned two weekends instead of one two celebrate the cemetery’s 200th anniversary and accommodate the increasing volume of attendees.

As a result, this year cemetery affiliates expect the largest number of attendees to Angels on the Bluff yet, with approximately 4,000 visitors each weekend in tour group sizes of 50 people, Ratcliffe said.

Each $40 ticket includes a bus ride from the Natchez Community Center at 215 Franklin St. to the cemetery, where participants begin an approximately one-mile walking tour. Attendees should arrive 15 minutes before their scheduled departure time and bring a flashlight.

Tours buses leave every 15 minutes from the community center, with adequate parking nearby.

It takes the work of roughly 200 volunteers to host Angels on the Bluff each year, Ratcliffe said.

A prominent architect in the early 1900s, Samuel Abraham Marx was born to a Jewish family in Natchez, in 1885. He graduated from MIT’s Department of Architecture in 1907, with his thesis Design for a Synagogue. He then studied for eight months in Europe. He designed the shelter house at the cemetery in 1914 and earned great fame as an architect nationally. Other noteworthy creations of Marx’s include the Alexander Hamilton Memorial in Chicago’s Lincoln Park, the New Orleans Museum of Art, and in Los Angeles the Edward G. Robinson’s home, May Company department store, Tom May’s house, and the Morton D. May’s house in St. Louis. He also did interior decorating for the Pierre Hotel in New York.

A Natchez native, young Rosalie was the second daughter of German Jewish immigrants Aaron and Fannie Beekman. As she and her family fled their Natchez Under the Hill home when the city was shelled by the USS Essex in September 1862, she was struck by shrapnel and died the next day.

A graduate of the University of Michigan, Mary was born in Kalamazoo, Michigan, but grew up in Natchez. She is remembered as a dedicated, eccentric local historian and genealogist. In 2010, the Natchez City Cemetery was the recipient of the Mary Postlethwaite History Award, created in her honor by the Historic Natchez Foundation.

Born enslaved in Alabama, Reverend Jacobs and his family escaped to freedom in Canada. Arriving in Natchez as an ordained Baptist minister after the Civil War, he also served in the State Legislature, and was instrumental in founding the Natchez Seminary, now Jackson State University.

Born enslaved in Kentucky, Benjamin was in Natchez by1850 when he married his wife, Matilda, a free woman of color. After emancipation, he became a well-known Natchez gunsmith. A member of Hiram Revels Lodge No. 3, he was one of the oldest black Masons in Mississippi at his death in 1904.

A North Carolina native, Dr. Tooley arrived in Adams County, Mississippi Territory, about 1813. A true Renaissance man, he was a physician, Methodist Episcopal minister, noted astronomer, meteorologist, and scholar of ancient Near Eastern culture. Noteworthy is his study of the 1823 yellow fever epidemic and the 1840 Great Natchez Tornado.

A native of France who at eighteen was conscripted into the French army, Edward came to America in 1833 and eventually moved to Natchez where he became a successful auctioneer and salesman. An “educated Frenchman” and an “excellent Hebrew scholar,” he was buried with Masonic honors upon his death in 1868.

A New Orleans native, Clarence moved to Natchez in 1917 after falling in love with a local girl, Myrtle Evelyn Clark. Several generations fondly remember his warm hospitality. Under his management, the Eola Hotel became the social center of Natchez and a popular hotel for visitors to the Pilgrimage, the town’s annual tour of historic homes.

In addition to these performances, Angels on the Bluff will also include musical offerings from LlJuna Weir and Carlee Reed and a special presentation by the Natchez Middle School Strings, Ratcliffe said. The sound of bagpipes and a French horn will also permeate through the cemetery as well as the French horn courtesy of Natchez High School’s assistant band director, Jamien McCallister.

To claim your tickets before they’re all gone, visit www.thenatchezcitycemetery.com.