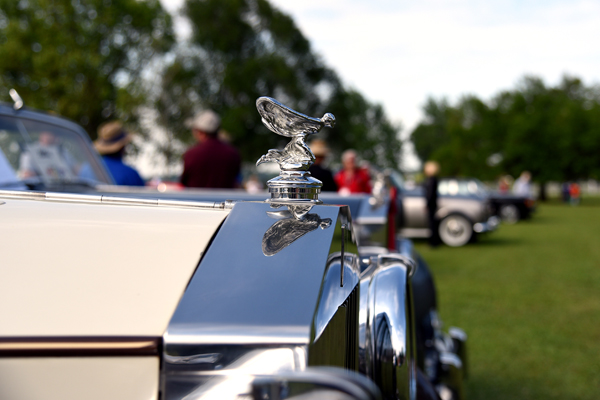 NATCHEZ — The City of Natchez and other supporters of the annual Natchez Euro Fest car show are organizing another event to take its place under new leadership.

Richard Branyan, a member of Southern Delta Region Rolls-Royce Owners Club and long-time supporter of the Euro Fest, has agreed to help organize a show.

Mike Marsh, who for seven years orchestrated the Natchez Euro Fest, announced this week that he no longer could do so for financial reasons.

“The Southern Delta Region Rolls Royce Club has always had a show within Euro Fest,” which made up about a third of the Euro Fest. Bringing back those car owners and cars plus some others is a matter of calling the right people, Branyan said.

“One-hundred cars seems to be the goal,” he said. “I can find 70 people with British clubs and start there.”

Branyan is the owner of a 1949 Rolls Royce Silver Wraith which was sold without a body and then sent to the coachbuilder of the buyer’s choice, he said. There are only 12 cars that exist with a similar build as Branyan’s, which he inherited from his father, he said.

He has been going to car shows with his father since the early 1970—before he was 9 years old.

For many years the Natchez Euro Fest brought more than 100 rare cars to the grounds of Rosalie. In its final years, it shifted north to Natchez bluff park.

The show was as much for the spectators as it was for event participants and provided a way for locals and car enthusiasts willing to drive for a weekend to enjoy classic cars in a historic city. To have a car show that is catered to spectators as much as participants is rare, Branyan said, adding it’s also rare to have one in the heart of a historic city where the participants’ spouses can also shop and eat within walking distance.

“The biggest asset Natchez has is Natchez and getting people to Natchez is relatively easy,” Branyan said. “I think everything is going to really come together.”

The next car show is planned for the weekend of April 20-22, 2023, outside the Natchez Grand Hotel.

On Thursday, April 20, Branyan plans to host a pre-show party for the participants followed by a drive the Friday afternoon before the official show starts on Saturday. A closing reception for the drivers for Saturday night is to be determined, he said.

“It is free for spectators and we would like it to be free for the people to bring their cars,” he said.

The event last year drew 150 entrants from nine different states to the Natchez bluff as well as to Natchez restaurants and hotels, Marsh said.

“As a free public event, increasing cost finally took their toll after seven years,” he said.

In a press release, Marsh said it is with “mixed emotions” that he can no longer host the show after meeting with Natchez Mayor Dan Gibson and Visit Natchez Executive Director Devin Heath over the weekend.

“We had a very candid discussion and after much disappointing thought, I feel my decision is in the best interest of all,” he said.

“After seven years of the Euro Fest, three with weather obstruction and one with a COVID shutdown, the 2022 show finally produced the quality event I had strived for since 2016, opening the door to bigger and better opportunities to come,” he said. “We had over 150 entries from nine different states, a most successful drive on the Friday prior, and two very nice dinners for participants and guests. The hotels were happy, as were many restaurants, but more importantly, the good people of Natchez seemed to truly enjoy this free, fun family event like never before.”

Gibson said the City of Natchez has pledged $2,500 for the event but Marsh would have liked more.

“We’re grateful to Mike Marsh for all that he is done over the years,” Gibson said. “It’s disappointing to us that he doesn’t want to continue. At a certain point, everyone has to make these decisions, but we very much want to see this car show continue. I immediately turned to Richard because he has been a behind-the-scenes genius. As someone who has so many connections in the car world, I can think of no one better.”

Gibson added there are others who want to see the car show continue. Marc Doyle—the husband of Chesney Doyle, the past president of Downtown the Downtown Natchez Alliance—has been another behind-the-scenes supporter of the Euro Fest for many years, Gibson said.
“Both of them want to see it move forward and perhaps even become something better,” Gibson said.

Doyle said Branyan is “in the driver’s seat,” but as a supporter of the Euro Fest, he has also offered his support of Branyan’s effort to reorganize and rebrand the event.

“We are going to have an event tentatively called the ‘Natchez Concours,’” He said.  This name reflects the same kind of branding as the most famous shows in the country at Pebble Beach and Hilton Head. Its mission is to be a free public event in the spring featuring exceptional classic European Cars and family activities for everyone.

“Everybody loves to come to Natchez for a great event, whether it’s music, balloons or cars. It’s the hospitality and the historic buildings and our rich cultural history and the greatest view of America’s greatest river that brings people to Natchez. … For those of us who have been working on it for many years, it’s all about Natchez and not just about the cars.”

In addition to the City’s sponsorship, the City of Natchez offers support through police presence for security and traffic control and the Public Works Department helps with set up and clean up. In 2023, Gibson said the city may also help with an opening event and provide the first-ever City of Natchez trophy to the winner.