‘He leads by example’: New scholarship named for long-time Rotarian committed to Co-Lin 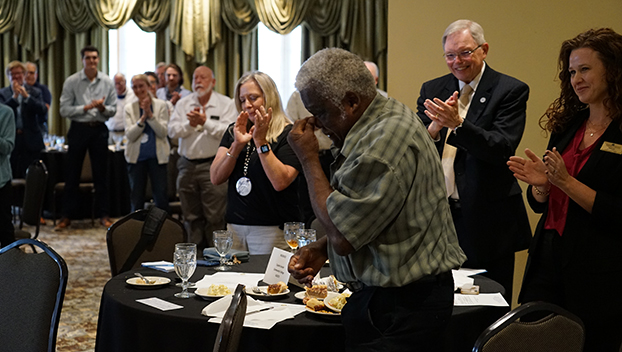 Andrew Calvit wipes tears at Wednesday's Rotary Club of Natchez meeting after a new scholarship is named in his honor. (Sabrina Robertson | The Natchez Democrat)

NATCHEZ — Andrew Calvit said he knew something odd must be going on when the Rotary Club of Natchez President Lauren Middleton called him to a table and said, “We won’t start this meeting without you,” but he never dreamed what it could be.

Calvit had been sitting outside taking up money from the last few Rotarians straggling into Wednesday’s luncheon at the Natchez Grand Hotel, just as he always does before every meeting.

He sat quietly eating a plate of potato salad and grilled chicken as Nancy Hungerford, who is the head of the club’s scholarship committee, made a special announcement.

Their newest scholarship, the Andrew Calvit Rotary Scholarship for $2,000, will be awarded each spring to a qualifying senior from an Adams County school who plans to attend any Copiah Lincoln Community College campus.

“It’s all a shock to me,” Calvit said of the announcement. “I accept this humbly but it won’t give me the big head.”

He fought tears while Hungerford gave a quick description of Calvit’s background and why he deserves the honor. He was affectionately known as “Atmos Andrew” working for Atmos Energy for 36 years before he retired at the end of 2017.

He grew up in the Cranfield community and started his first job working on a farm for a modest $3 per hour. He later served in the U.S. Army. In 1975, he began his career at Mississippi Valley Gas Company as a meter reader. Then in 1978, for the next six years, he took night classes at Copiah-Lincoln Community College while working at Armstrong Tire and Rubber Company.

“I never went to (college) in the daytime,” Calvit said. “All of my education has been at night.”

Calvit returned to the gas company in 1984 and remained there when Atmos Energy purchased the company in 2002. Two years later, Calvit received his Master’s in Business Administration and earned the operations supervisor title at Atmos. Calvit joined the Rotary Club in 2005.

In addition to serving in the Natchez Rotary Club and on the board for Merit Health Natchez, Calvit has had a lifelong commitment to Co-Lin, Hungerford said.

Melton King, who is the chairman of the Copiah-Lincoln Community College Board of Trustees, said he doesn’t recall when he met Calvit but they became closest when Calvit began his service on the Co-Lin Foundation board, which is the fundraising branch of the college.

“He served on that board for 18 years uninterrupted,” King said.

Calvit said his two favorite letters in the alphabet are “I” and “C” because they begin the words “involvement” and “commitment.”

“I do things because I love it,” he said. “I love people and I believe if you’re going to be involved in any organization or anything, you should be involved and committed. … Co-Lin is a diamond in the rough. There is no reason for our young people to not get a good education and they can start right here.”