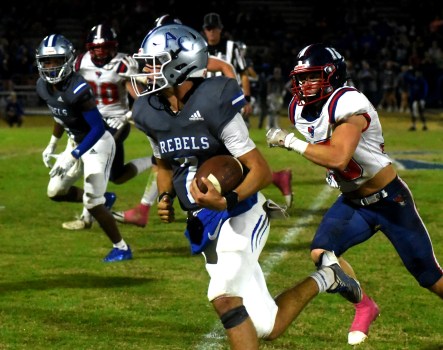 Adams County Christian School quarterback Coleman Carter weaves through the Winston Academy defense for positive yardage in the second half of the Rebels 15-14 win over the Patriots. (Ben Hillyer / The Natchez Democrat) 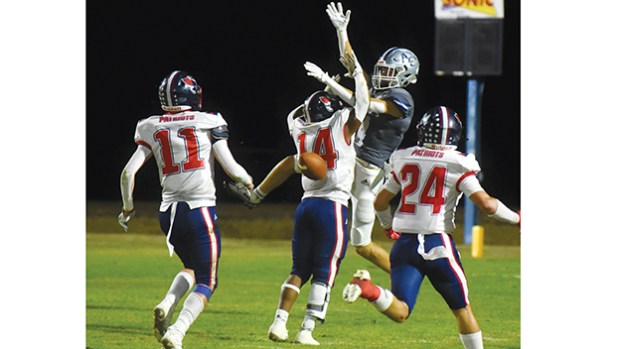 8. Winston Academy’s JR Coleman draws the pass interference call as Adams County’s Samuel Merriett reaches to receive the ball during the first hald of the Rebels’ 15-14 win over the Patriots. (Ben Hillyer / The Natchez Democrat) 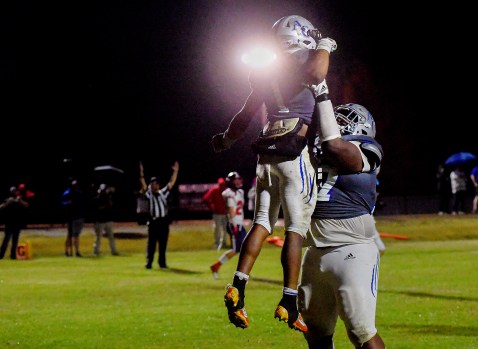 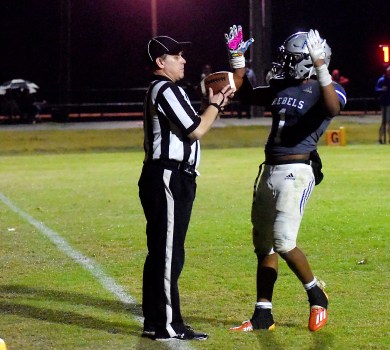 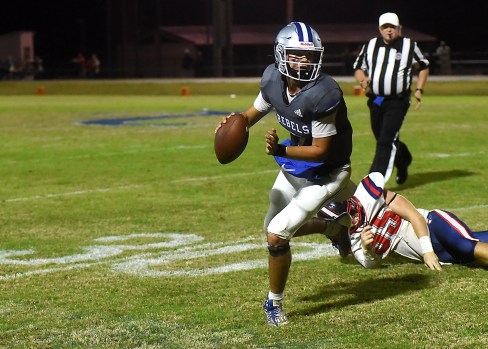 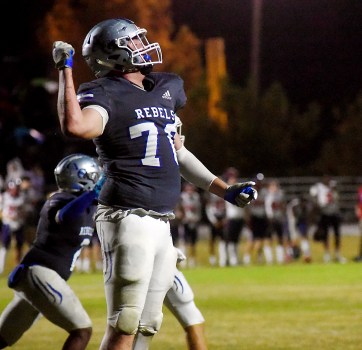 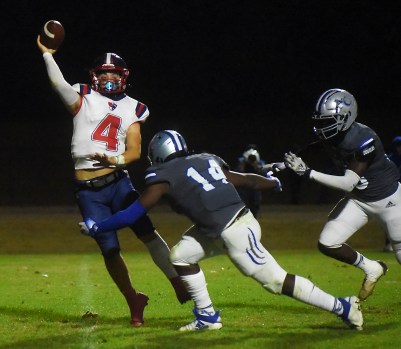 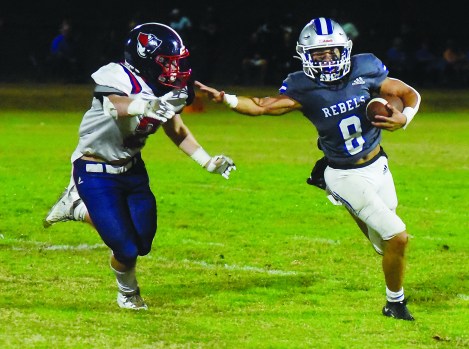 NATCHEZ — The Adams County Christian School Rebels were in danger of having their season come to an end trailing Winston Academy 14-7 with time winding down in the fourth quarter of their MAIS Class 4A Quarterfinals game last Friday night.

But ACCS got a key interception by Riley Roach, Connor Aplin had a big run deep in Patriots territory, and Dantavios Stampley ran in from two yards out with 4:53 to go to make it a 14-13 game. Then things got interesting. The Rebels were lining up for the game-tying extra point when the Patriots jumped offsides.

That allowed head coach David King to make the decision to go for the two-point conversion from the one-yard line. Rebels sophomore quarterback Coleman Carter barreled into the end zone and ACCS escaped with a 15-14 win at Bobby Marks Stadium.

“They were a very good team. They matched our intensity,” ACCS assistant coach Matthew Freeman said. “We ended up getting in a dogfight. We were able to pull it out.”

ACCS, the No. 1 seed, got behind early as Winston Academy, the No. 8 seed, used its power running game to march down the field. Patriots quarterback Jett Joiner ran in from one yard out and Reed Yates added the extra point to give them a 7-0 lead with 4:18 left in the first quarter.

The Rebels responded with a touchdown drive of their own late in the first quarter, which ended with Coleman’s 17-yard touchdown pass to a wide-open Terrell Tenner in the back of the end zone.

Coleman completed seven of 16 passes for 114 yards and no interceptions to go with 38 rushing yards on 15 carries. Aplin’s big run in the fourth quarter went for 29 yards. Stampley had nine carries for 41 yards while Tenner had 11 carries for 39 yards.

After that, battling the elements was no fun for either team. ACCS drove into Winston Academy territory several times, but then was its own worst enemy whether it be missed blocks that led to sacks or tackles for loss, an untimely penalty, or incomplete passes.

But the Rebels’ defense kept the Patriots from taking advantage of those miscues until late in the third quarter. That’s when Joiner hooked up with Donnie Chunn, who did the rest on a 37-yard touchdown catch-and-run to give Winston Academy a 14-7 lead with 4:03 to go in that quarter.

“Defense did outstanding. Coach (Richy) Spears had our players in the right place to make the plays,” Freeman said.

Jesse Grayson, who had one catch for 41 yards, led the defense with a team-high seven tackles while Stampley had six tackles.