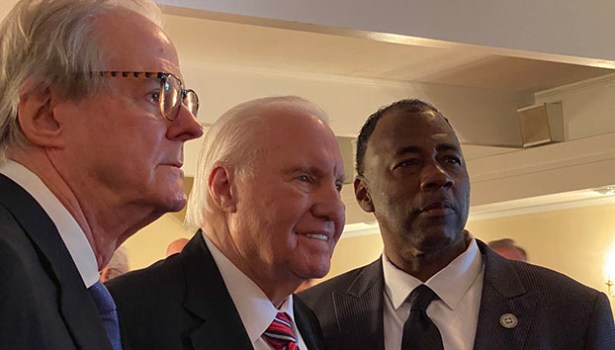 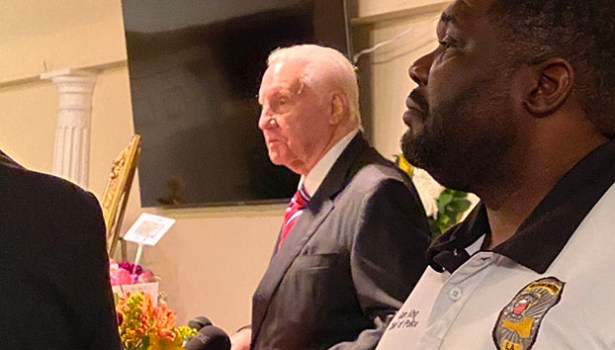 The Rev. Jimmy Swaggart give the eulogy for Jerry Lee Lewis at Young's Funeral Home in Ferriday on Saturday. Ferriday Police Chief Sam King is in the foreground. 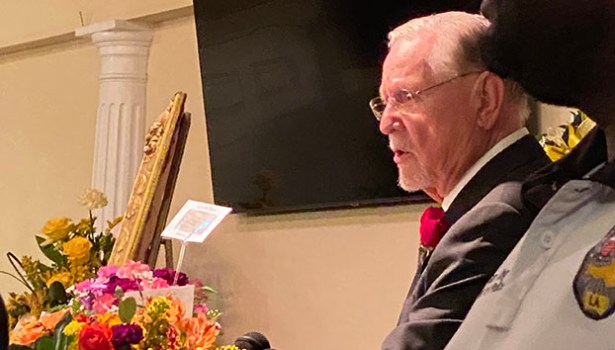 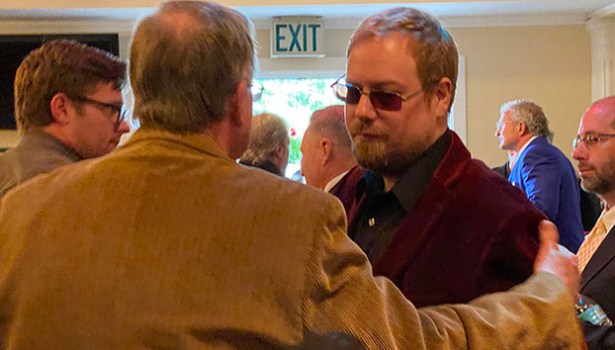 FERRIDAY, La. — When your competition was Jerry Lee Lewis, you knew you were competing for second place.

That’s what Clyde Ray Webber learned the first time he met Jerry Lee Lewis in 1950 at the Block High School gymnasium in Jonesville when they both were getting ready to compete in a talent show.

“We were competing for first prize, which was $25. In 1950, $25 was a lot of money,” said Webber, who served a record 55 years as Concordia Parish Clerk of Court. “But we knew we weren’t going to win that because everywhere we went to, Jerry won it. He would take his shoes off and start stomping on the floor and playing the piano, and we knew we were going for second place.”

Webber’s remarks were made Saturday to an overflowing crowd at the funeral of Ferriday native and Rock and Roll legend Jerry Lee Lewis.

Fans and friends of the late Lewis spilled out onto the sidewalk and streets of Young Funeral Home on Saturday morning during his 11 a.m. funeral. The line began to form before 8 a.m. for Lewis’s visitation, which began at 10 a.m.

Lewis’s cousin, the Rev. Jimmy Swaggart, delivered the eulogy and some people in the crowd admitted to being there as much to get a glimpse of Swaggart as to pay their respects to Lewis.

Webber said Lewis brought the house down that night in 1950 in Jonesville when he sang the song “Hadacol Boogie.”

“The talent show in Jonesville that night was sponsored by the Hadacol Company. Many of you may not remember the Hadacol Co. out of Lafayette owned by Mr. Dudley J. Lablanc. Hadacol was a high potency, patent medication that was good for anything, from a hangnail to a heart attack. It was a combination of vitamins and minerals and a real good splash of alcohol. It was a miracle in a bottle.

“If you are a real fan of Jerry Lee, you know that he recorded a song called the Hadacol Boogie. If your radiator leaks and your motor stands still, you give it Hadacol and watch it boogie up the hill,” Webber said to uproarious laughter.

“We knew where he (Lewis) is right now. He made it right with the Lord not long before his passing,” Donnie Swaggart said.

During the eulogy, Jimmy Swaggart discussed times spent with Lewis in Ferriday when the two were young boys. Both are the same age; they grew up in lockstep as young boys.

Swaggart said Lewis liked to fight, and they spent much time as boys fighting until Swaggart tossed Lewis out of the second floor of his father’s two-story barn.

“When we were 7 and 8 years old, we fought every day, and he whipped me every day,” Swaggart said. “After I tossed him out of that barn, he never jumped me again!”

Swaggart talked about how he and Lewis learned to play piano together.

“We were playing rock and roll before anyone knew what rock and roll was, but my mother and daddy didn’t think it was right,” he said.

“Jerry Lee was probably one of the greatest entertainers who ever lived,” Swaggart said. “When we lost him, I lost the brother I never had. I had to make myself realize he was no longer here. I talked to him just hours before he passed away.”

Swaggart and Lewis recorded a Gospel album in Baton Rouge at Swaggart’s ministry headquarters, which includes a recording studio.

“When we got to the studio, he was very weak. The stroke had taken a lot out of him,” Swaggart said. “I said, ‘Lord, I don’t know if he can do it or not.’ His voice was very weak. When he sat down at the piano and the engineers said the red light was on, When he opened his mouth, he said, ‘Jesus, hold my hand; I need thee every hour. Hear my feeble plea, Oh, Lord. Please look down on me. As I kneel in prayer, I know I’ll meet you there, blessed Jesus. Hold my hand, oh, Jesus, hold my hand.’

“We didn’t know it then, but that was the last recording he ever made,” Swaggart said.

After the funeral service, the family traveled to Clayton, where Lewis was buried in a private service.

Funeral participants were invited to the Arcade Theater in Ferriday later in the afternoon to celebrate Lewis’s life.