Windfall: City, county get $1.9 million in grants to allow for completion of Silver Street and Morgantown Road projects 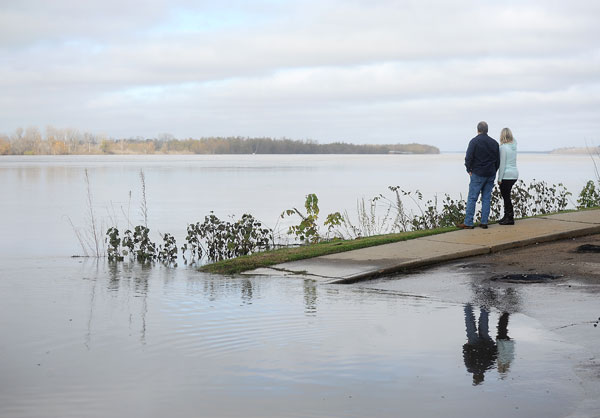 A couple from Baton Rouge looks up the Mississippi River from Silver Street in January 2016, where the river had started to cover the end of the street. (Ben Hillyer / The Natchez Democrat)

NATCHEZ — In one fell swoop, Natchez and Adams County earned $1.9 million in grant funding Friday, which will completely fund the city’s Silver Street project and the Phase 2 and completion of the Morgantown Road project.

“What has happened today for the City of Natchez is truly historic,” said Natchez Mayor Dan Gibson. “We did not get just one grant, but two, and 100 percent of the funds we requested, which fully funds both projects.”

Natchez received $1.004 million on Friday in a 100 percent matching grant from the Mississippi Department of Environmental Quality Water Infrastructure Grant Project in order to raise Silver Street to allow Viking Mississippi and American Cruise Lines to construct permanent docks for its vessels here.

The project will raise the elevation of Silver Street along the historic “Little Mexico” area near the city utility lifting station and boat ramp and docks above flood stage and install new sewer, water and storm water drainage systems in the area. Sewer and potable water will be replaced with city forces and material during the project.

The city will use $1.004 million of its American Rescue Plan Act funds to match the state’s grant funds, along with $250,000 each from Viking Mississippi and American Cruise Lines. That totals $2.508 million available for the project.

“This is pending final bids, but according to our estimates, that should be adequate to complete the Silver Street project,” Gibson said.

“I have just today asked for work to begin on the bidding process and for us to give final approval of plans for Silver Street. This may be ambitious, but while the river is low, I would like to see if we can go ahead with this project now. I know we are getting into wintertime, but we are still asking the questions. Next week, we should know if we can move forward now,” he said.

The Morgantown Road Drainage and Reconstruction Project is a joint effort between Adams County and the City of Natchez.

Earlier this year, that project earned $2.4 million in federal earmarks, which has allowed Phase 1 of the project to go forward.

However, about $1.8 million were still needed for Phase 2.

“The drainage issues on Morgantown Road has led to major flooding of that road,” Gibson said. “We are grateful for these grant funds to complete the work badly needed on Morgantown Road. It has been great working with the county on this project.”

Wes Middleton, president of the county’s Board of Supervisors, said the news of the grant is exciting.

“It’s tremendous. Getting the ARPA fund match on the wastewater grant is excellent. The city and the county applied for this grant together, and that’s more evidence that the relationship the city and the county currently have and the progress we are making working together is better than it has been in a long, long time. City and county residents are reaping the rewards. I know everyone is tired of hearing about Morgantown Road, but it’s going to happen. It’s not going to happen overnight, but it should be starting very soon. It’s going to be a long project, but in the end, it’s something everybody will be very proud of. And it’s way past due,” Middleton said.

State leaders step up for Natchez

“This has been one of the most rewarding days I have had since becoming mayor,” Gibson said. “I knew stepping into this job that there were many challenges facing Natchez, but I truly felt my relationships and experience with many state and federal leaders was the kind of experience Natchez needed and getting this news makes all of the hard work worthwhile.

“This news would not have happened without the support of our legislative delegation and our lobbyists. I am so grateful to our state leaders — Gov. Tate Reeves, Speaker of the House Philip Gunn and, in particular, Lt. Gov. Delbert Hosemann. On his visit to Natchez for the christening of the American Symphony, Hosemann privately pledged to help us with these projects and to do all he could do to move them forward. Today, my first call was to him to thank him. I’m about to call the governor and the speaker,” Gibson said.

The state has more ARPA funds available for grants.

“We are not stopping here. We will be going after more grant funds,” he said.