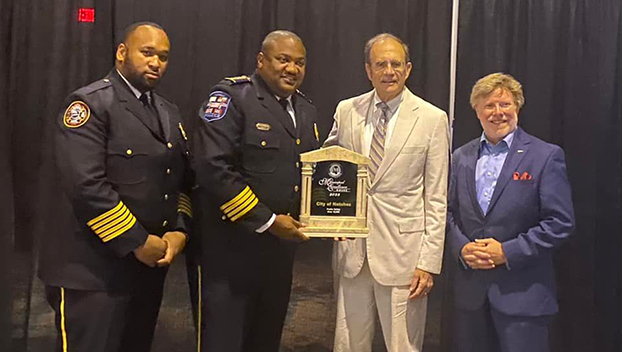 NATCHEZ — Natchez Police Chief Joseph Daughtry Sr. is one of three finalists for the City of Columbus police chief position.

“I know the quality of these three applicants, and they are all very capable,” Vice Mayor Joseph Mickens told The Dispatch. “You could flip a coin and I don’t care which one it lands on; they could do the job. They’re just that good.”

He added Daughtry is clearly a leader.

“(Daughtry) said leadership is not about being in charge, it’s about taking care of the people you’re in charge of,” Mickens told the Dispatch. “That struck me. He talked about getting out into the community, and not asking people to do more than he would do.”

A new Columbus chief could be hired during a special called council meeting at 9 a.m. Friday.

Last week, Daughtry confirmed he interviewed for the position and said he had been applying for jobs at other departments to see what would happen. He also said he did not want his officers to feel as though he is “already gone.”

“That isn’t the case,” Daughtry said Friday, adding he hasn’t made a decision whether to leave the department or not. He added other departments have reached out to him, encouraging him to apply with them.

Natchez Mayor Dan Gibson said he was disappointed to hear the Natchez chief is applying for other opportunities.

“I consider it a compliment to Natchez that we have a chief that is sought after by other agencies,” Gibson added. “I can’t blame anyone for desiring to better himself or herself. At the end of the day, we have a lot of appreciation for Joseph Daughtry and what he has done for Natchez and I hope he will remain our chief going forward.”

In his two years at Natchez Police Department, he has implemented a special response team called VIPER and reinstated a SWAT team and Crime Stoppers, an anonymous reporting program that sometimes rewards citizens for tips that lead to an arrest. By Daughtry’s recommendation, the city ordered new police cars from Enterprise’s Government Fleet program with fresh decals that feature the Mississippi River bridge as the backdrop.

For a fee of $150,000 the first year and $132,000 for the following three years, the city leased a total of 15 new vehicles and expects to save tens of thousands of dollars each year in maintenance costs with each vehicle being replaced after they reach 60,000 miles.

Additionally, NPD officers have new uniforms and recently added two Harley-Davidson motorcycles to the department’s fleet that cost a whopping $10 each.

A $2 per hour pay raise for all police officers went into effect with the city’s new budget beginning Oct. 1, which brings officers’ starting pay from $15 to $17 per hour plus an additional $0.50 increase after they complete police academy training. This was the first pay increase Natchez officers have had since 2018, Gibson said.

Additionally, the City of Natchez, Natchez Police Department and Daughtry have been awarded by state agencies for exceptional work. In June, the city received the Municipal Excellence Award in Public Safety. Natchez is also now a training location for part-time police officers in Mississippi, taking the department a step closer to becoming a fully-accredited, Gibson said.

“His record speaks for itself. He definitely has helped us in following through with our plan to make our city safer. We have been hiring new officers while so many other departments are struggling,” Gibson said. “We are proud of him and look forward to his continued leadership. … And you can print this, I almost don’t want to brag on him because it makes for quite the endorsement.”

Doran Johnson, former assistant chief, was appointed to serve as interim chief and said at the time he would apply for the permanent post.