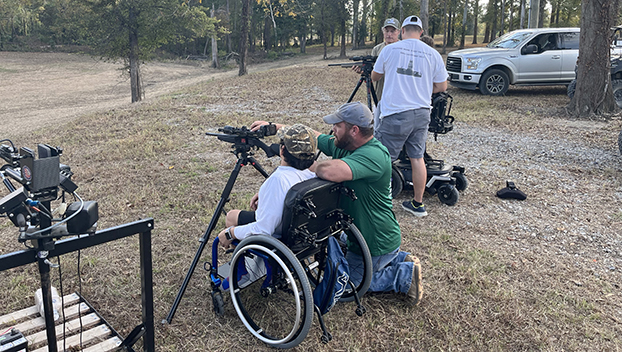 FERRIDAY, La. — Rain did not spoil the fun for 20 kids going on a hunt thanks to the Miss-Lou Dream Hunt foundation last Saturday.

The Dream Hunt Foundation is a non-profit organization providing hunts to disadvantaged kids who would otherwise not have the opportunity. Of the 20 participants, 12 were able to harvest a deer and take the meat home. Volunteer guide Tom Milliken said the eight young hunters who did not harvest a deer did have a chance to see deer and experience a hunt.

Rifle Point served as the base of operations for the weekend due to its central location and facilities. Honey Brake hosted the annual fundraiser and some of the hunters, and Giles Island allowed three kids to experience the hunting lodge and deer hunt for the second year in a row.

“Giles Island has a new owner and he was kind enough to let us hunt. It was great,” Milliken said. “Paul Meng graciously allowed us to use Rifle Point as our central base again. The Meng family was involved in taking a hunter too. So a big shout out to them.”

This is the second year a hunt has been held by the Miss-Lou Dream Hunt Chapter. The children selected receive free transportation, food and lodging and the hunters are equipped with camouflage and other equipment for the hunt.

Milliken said when the kids were not hunting, they were busy playing football or pool, fishing, eating and going down to the rifle range. Volunteers treat the kids as their own and try to give them a special experience.

He said as a guide he fed off of the kids’ energy and the hunter he took was really excited about the opportunity. Early morning rain dampered the early hunt as six deer were killed, but they knew the afternoon hunt would be good. Despite seeing smaller bucks, yearlings and fawns, Milliken’s hunter wanted to wait for a mature deer. He described the feeling of “deer fever” when the deer came into view.

“I was shaking in the box with adrenaline. Minutes go by and you hear the safety click on and off. The blood gets pumping, I was shaking 100 percent,” Milliken said. “It took us about three minutes to get a chance at a shot. I had to keep the kid’s sights on the mature deer. He put a great shot on her and a few minutes later was able to harvest another mature doe with a doe tag. It was exciting.”

All of the meat is given to the participants who were able to harvest a deer. Miss-Lou Dream Hunt Chapter not only helps the children but it also aids property owners in harvesting deer that need to be killed for herd management. Too many deer impacts the quality of resources they need to survive.

Milliken said he hopes more children will have the opportunity to participate in the hunt next year.  “It was just like taking your kid. We try to get them a good shot and do everything we can to allow them a good attempt. It is very rewarding,” he said. “To get the success out of it is awesome. We love it because it gets to a point in our hunting lives where it is more fun to do it with someone new and get to relive the experiences.”