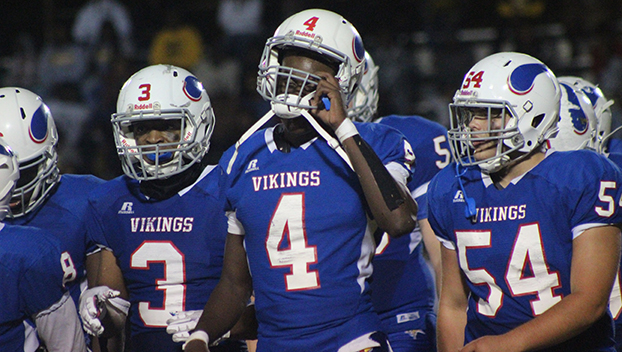 From left, Seniors Devin Jackson and Sema’J Hayes walk across the field in a game against Ferriday early in the season. On the right, junior lineman Gage Cupstid and the Vidalia linemen will have to win the battle at the line of scrimmage to advance in the playoffs. (Hunter Cloud | The Daily Leader)

VIDALIA, La. — The Vidalia High School Vikings will travel to Iberia Parish in south central Louisiana to take on the Loreauville High School Tigers at 7 p.m. Friday in the bi-district round of the 2022 LHSAA Non-Select Division III Playoffs.

Vidalia (6-4) enters the postseason as the No. 20 seed. The Vikings are coming off a tough loss at home on Senior Night to Oak Grove High School 49-12 last Thursday night. They finished tied for fourth place in District 2-2A with Rayville High School, which also made the Non-Select Division III Playoffs as the No. 26 seed, and Ferriday High School, which just missed out on the Non-Select Division IV Playoffs after the Trojans finished at No. 29 in the final power ratings of the season that were released earlier this week.

Loreauville (6-4) won its regular-season finale on home in decisive fashion, defeating Delcambre High School 49-16 last Friday night. The Tigers finished in a tie for first place with Ascension Episcopal School at 4-1 in District 8-2A, but lost the tiebreaker after falling to the Blue Gators 30-20 back on Thursday, Oct. 20.

Vidalia head coach Michael Norris said playing in what he feels is the toughest district in the state in Class 2A has helped the Vikings get ready for the postseason.

“Our district is a tough of a district as there is in 2A in Louisiana. We have three teams in General Trass, Mangham, and Oak Grove that are always state championship-caliber teams. Every time they are in the quarterfinals or semis,” Norris said. “We were hoping to get a home game, but that didn’t happen. But now everybody is undefeated in the playoffs.”

As for what the Vikings will be working on in practice this week to get ready for Loreauville, Norris said, “Cleaning up what we do. Fundamentals on defense and execution on offense.”

After looking at film on the Tigers, Norris believes there are some areas where the Vikings have an advantage and are looking to use those to give Vidalia an opportunity to pull off the upset. But that may be easier said than done against a good Loreauville team.

“They’re physical. They play sound, fundamental football. They don’t make many mistakes. They’re a well-coached team,” Norris said. “However, I think our athleticism and speed is going to give them problems. Our ability to stretch the field vertically and laterally.”

Norris noted that Loreauville’s offense is a lot more running than passing and that the Tigers run a 4-2-5 defense, which is a formation that he said the Vikings have seen a lot this season.

“They run a tough running style. Lot of power runs, lot of guard pulls. They don’t throw the ball much,” Norris said. “They’re mostly zone coverage (on defense). They let the guys run in space and they do a good job.”

When asked what he feels like could determine the outcome of this game, Norris said, “This is the playoffs. Whichever team shows up and executes better and doesn’t turn the ball over. We have to win the turnover margin. We have to execute. We’re both in the playoffs for a reason.”

While Vidalia may indeed have an advantage when it comes to speed and athleticism over Loreauville, both the offensive line and defensive line will need to have a big game if the Vikings are to emerge victorious and advance to next week’s regional round.