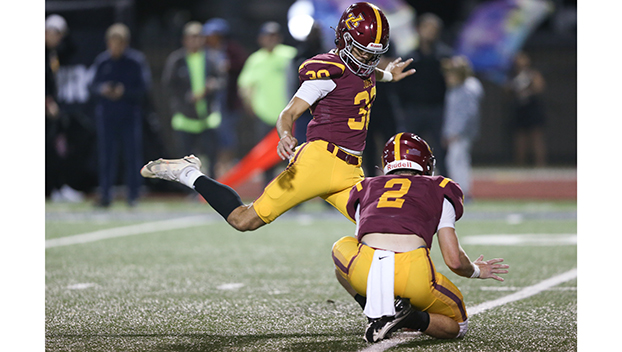 Yohan Thompson kicks a field goal for the Jones College Bobcats. He was a kicker for the ACCS Rebels before graduating and going off to college. He made eight of 11 field goal attempts with a long of 43 yards. (Submitted Photo | Jones College Athletics)

NATCHEZ — Former Adams County Christian School athletes Jamar Kaho Jr. and Yohan Thompson wrapped up their football season at Jones College. The Bobcats made it to the NJCAA playoffs but lost in the first round.

Kaho is a freshman who played in his first season. He had one catch for three yards against Mississippi Delta Community College and learned a lot from older experienced players in front of him.

Kaho said he is grateful to have a chance to experience the college game and make a reception for his team by the end of the season. “I learned a lot from the older guys. They showed me different moves to get open and they showed me how to play at the next level,” Kaho said. “I’m going to continue to play football and hopefully will get a D1 offer at the end of next year. My goal for next season is to get stronger, faster and be more explosive. I also need to gain weight.”

At six foot-five inches, Kaho weighs 197 pounds but needs to add some more to his frame. He said he loves Jones College for the environment and experience he has had there so far. It is a place he feels wanted.

Kaho’s plan remains the same from signing day, he wants to become an engineer. Specifically, he wants to get a degree in mechanical or aerospace engineering.

“My academics are going good. Being a football player you have to have good academics and keep your grades up, academics come first,” Kaho said. “The most memorable thing this season for me was being with my teammates and going to the playoffs. It was pretty cool.”

Thompson had a strong year kicking. Due to COVID, he was able to play a third year at Jones, where he made eight of 11 field goal attempts and handled kicking and punting duties. His longest field goal of the season was 43 yards.

He said it was a fun season as they made a run at the playoffs and went 7-2 over the season. Thompson came into the season not knowing he would handle field goals and PATs. Not only did he develop as a player he improved in the classroom.

“My freshman year we had a long break from school due to COVID. I had not taken classes for months. At first it was a shock. It was different having to make sure you took care of class. It was an eye opener, you have to put in the effort,” he said. “Things started to click for me. When I handled business in the classroom I saw improvement elsewhere. It all went hand in hand. I like to have everything taken care of. When I did well at school it gave me a peace of mind.”

A peace of mind helped him on the football field as kicking is a mental game. He also learned more about his body and how to listen to it. This affected his physical fitness and knowing how often he needed to practice. While he has handled field goals, punts and kickoffs at ACCS, he came to Jones handling just kickoffs. Last year, he added punting and then field goals this season. At first, he said he was nervous kicking field goals but it has become enjoyable.

“Field goals and PATs are just one play. You have to take care of business. I have enjoyed it a lot this year,” he said. “I took on a new role. I could not think much and just had to execute. Build up to the game starts during the week. Head Coach Steve Buckley is always telling us the little things matter and they add up.”

After this season, he said his favorite role is to kick field goals and the kickoffs are fun too. His long of 43-yards was more due to Jones College deciding to go for it on fourth-down if the stakes were high.

Yohan’s brother Christopher Thompson was a kicker at Alcorn State and is now at University of Arkansas-Pine Bluff. They practiced kicking together throughout the summer.

“He helped me out very much and showed me tricks. My groin was irritated from the motions of kicking and he was going through the same issues so he showed me stretches to help it,” Thompson said. “He gave me pointers on my follow through and form. It was crazy, we weren’t just kicking, we were talking. The next week, I felt better and he helped me out a lot.”

Before he was a kicker in football, Thompson played soccer at ACCS. He and his family are from Costa Rica and he said he was good at kicking from playing soccer his entire life.

After his brother left AC, he took on the kicker role for the Rebels. While he enjoyed soccer, it dawned on him that a career in football was more feasible than soccer. It made more sense to play football because he had a better opportunity to play in college, they were not being recruited in soccer, he said.

Thompson said he is not sure what is next for his career. If he does not get an offer he would like to walk on somewhere in Mississippi. He wants to keep pursuing a football career for the rest of his remaining eligibility.

He is also majoring in psychology because he was interested in how the brain works and the theories on psychological things were intriguing. Psychology was his favorite class at Jones College, he enjoyed learning about it and wants to stick with it.

Thompson said the drive he has to wake up in the morning, go to class and go to football are due to a competitive nature.

“My brother and I are close in age and we are competitive. We try to be the best we can be,” Thompson said. “My parents have also supported us and we don’t want to disappoint them. We want to make it up to them by trying to be great. I feel like God has given me the ability to play this sport. It is another reason we strive to be great. He has given us an opportunity and we don’t take that for granted.”