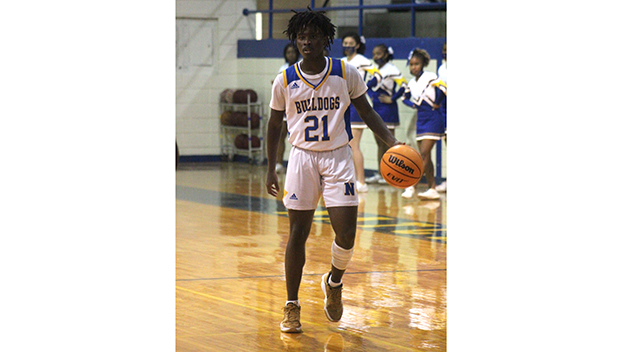 Javeon Walker is a returning starter for the Bulldogs who hope to make a run in their region and make the playoffs. File Photo | The Natchez Democrat)

NATCHEZ — After a bumpy start, the Natchez High School Bulldogs basketball team is on a roll and are looking forward to winning the MHSAA Region 5-5A championship and making a deep postseason run in the 2022-2023 season.

“I think we’re steadily getting better on defense. We’re still building chemistry and continuity on offense. We have a couple of kids coming off football. But it’s getting better the last few games,” Bulldogs head coach David Haywood said. “We’re playing mostly off our defense, so when district time comes around, that will be very beneficial to us.”

Among the key players returning to the Bulldogs this season are senior guard Kameron Carter, who Haywood says “initiates everything on offense”; junior forward Preston Jackson, whom Haywood said, is a guard-forward type; senior center/forward Elvis Jenkins, who was a Region 5-5A All-Region First Team player on defense; and senior shooting guard Javeon Walker.

“Preston, he played some last year, so he’s improving. He’s averaging about a double-double a game. Last night he had 17 points and he was in double digits in rebounds. Elvis Jenkins, he averaged 15 rebounds a game last year. He enjoys the whole totality of defense. He’s going to contest every shot,” Haywood said. “Javeon, he’s started this season shooting really well for us. We’ve got some younger players getting involved as well.”

As for what his goals for the Bulldogs are this season, Haywood said. “Just continue to get better as a whole to get ready for the district. Then win the district championship and make a postseason run. I think this team has enough talent as long as we stay healthy to win the district and then see what we can do.”

Florence High School won the Region 5-5A championship last season and Haywood said the Eagles are the team everyone in the region — Natchez High, Brookhaven High School, and West Jones High School — are looking forward to dethroning even though Haywood noted they have their best players returning.

“All these teams in our district are pretty good. Brookhaven, West Jones, Florence and ourselves,” Haywood said.

Natchez High returned to action on Thursday night as the Bulldogs played host to rival Jefferson County High School. The Bulldogs will take on the Sarah T. Reed High School Olympians at the Smoothie King Center in New Orleans, La. on Wednesday, Nov. 30 following the completion of the Lady Bulldogs’ game against the Lady Olympians.