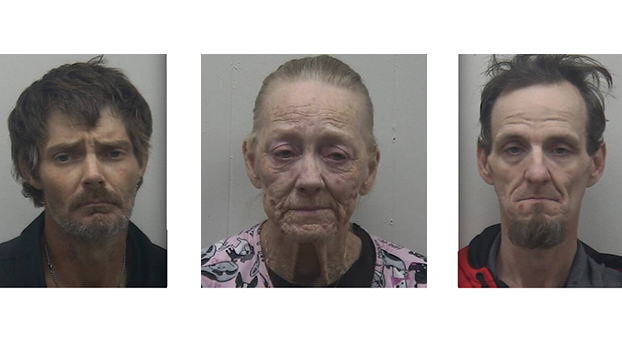 VIDALIA, La. – Additional charges have been added to two men accused as part of a human trafficking investigation, and authorities are searching for a third suspect.

George A. Rice, 48, and Jerry W. Brownell, 42, are each charged with principal to human trafficking, principal to cruelty to juveniles and principal to attempted sexual battery in relation to this case. Both are incarcerated after being convicted of child endangerment following a Vidalia Police Department investigation, Concordia Parish Sheriff’s Office said.

The men were charged as part of the investigation reports of juveniles being drugged and transported to “trap houses” where they were raped.

Jeanette Ratcliff, 70, remains at large with warrants for similar charges of principal to human trafficking, principal to cruelty to juveniles and principal to attempted sexual battery.

According to multiple news releases, CPSO’s Cyber Crime Unit began its investigation of the human trafficking operation on Oct. 24.

Detectives investigated “illegal activity between juveniles and adults, which consisted of the use of narcotics as well as sexual contact,” the sheriff’s office said. “During the initial investigation, numerous juvenile victims were identified, which resulted in the arrest of two subjects involved. It was learned that the activity had been ongoing since fall of last year when a juvenile victim was introduced to a suspect by way of a close family member. That introduction resulted in two juveniles being supplied with narcotics, then subjected to sexual activity at different locations, one of which (is) the victim’s residence in Vidalia where they were in the custody of a family member.”

Holloway reportedly “participated in the transportation of narcotics, as well as victims, to these locations,” CPSO said.

“The investigation has identified a network of subjects involved who engage in the use and sale of narcotics while using female victims for sexual activity, whether adult or juvenile, as a form of payment or trade,” the sheriff’s office said. “Louisiana law defines such activity as human trafficking.”

Anyone with information regarding the investigation is urged to contact Detective Stephen Lipscomb at (318) 336-5231 or submit a tip online using the CPSO mobile app. All who are arrested are presumed innocent until proven guilty, the sheriff’s office said.