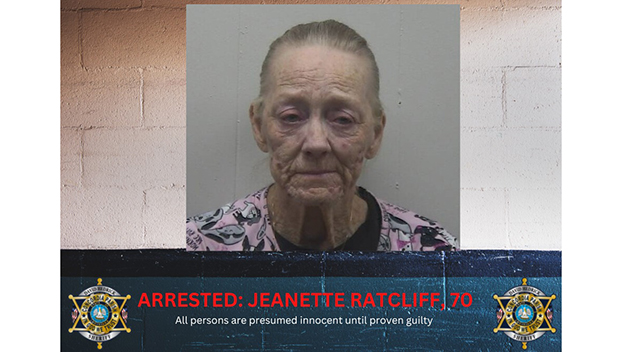 VIDALIA, La. — A 70-year-old Vidalia woman investigators believe to be linked to a human trafficking network was arrested Thursday.

Concordia Parish Sheriff’s Office Cyber Crime Unit first began investigating a human trafficking operation on Oct. 24 and reports juveniles being drugged and transported to “trap houses” in Concordia Parish and Adams County where they were raped. The Sheriff’s office states this activity had been going on since the fall of last year when a juvenile victim was introduced to a suspect by way of a close family member.

Jeanette Ratcliff, 70, was arrested and charged Thursday with principal to human trafficking, principal to cruelty to juveniles and principal to attempted sexual battery.

Two others from Vidalia, George A. Rice, 48, and Jerry W. Brownell, 42, who are already incarcerated for a previous conviction of child endangerment were also charged recently by CPSO with the same.

Eddie L. Holloway, 38, of Ridgecrest, was later arrested and charged with principal to human trafficking, principal to second-degree rape and two counts of principal to cruelty to juveniles.

Anyone with information regarding this case or these individuals is urged to contact Detective Stephen Lipscomb at (318) 336-5231 or submit a tip online using the CPSO mobile app. All who are arrested are presumed innocent until proven guilty, the sheriff’s office said.