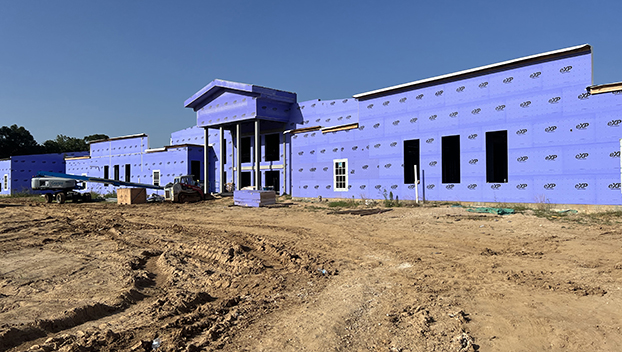 The new Natchez High School building as it looked in July. Construction has been moving along and the building could be finished within the next few months. (File photo | The Natchez Democrat)

Delayed contracting work, whether caused by a shortage of materials or workers, have been an issue all around the country and the school is no exception. When officials first broke ground on the project in December 2020, a projected completion date of Spring 2022 was given. As the project progressed—or didn’t progress—that date moved to October and then December.

“The date they gave us is Dec. 20. Realistically, we’re pushing into February (2023),” said Marco Gonzales of Volkert Inc., who is the project supervisor, at Wednesday’s school board meeting.

Still, Superintendent Fred Butcher said he is pushing workers to have the building ready by that date.

“I want to stay firm on Dec. 20 because if we tell them Dec. 31, it will be the Fourth of July,” Butcher said. “It’s like the more time we give them, the more time they want to take. … People say I ask for a lot, but we’ve given them a whole lot already.”

The contractor for the high school is Don Barron Contractor of Farmerville, Louisiana.

Gonzales said he isn’t giving them any slack.

“We are monitoring rain days to a T. We’re about to give them correspondence about what the site looked like in August and what it looked like at the beginning of November. If you look at it, don’t come and tell me that you need additional time for whatever reason when for 10 months it has sat there.”

Philip West, who is the vice president of the school board, said it doesn’t take a trained eye to notice that the building is coming along but isn’t close to being finished.

“Before October, people would ask me and I said it would be done in October. Then when we got to November, I said November. I know when I drive by, and I’m not a specialist, but I look over and say to myself, ‘this is not going to be complete until January, February or March.’ We just need to be in a better position to give people accurate information and for us to have accurate information when it comes to this project.”

This school year, students have been inside the middle school—where the former high school was—during an ongoing renovation that is nearing completion.

When students return from Christmas break, the administrative staff who are currently housed in the school library will be able to move to their new offices. Then work workers will start working on the library flooring, Butcher said. Currently, security fencing is being put up around the middle school, which should be done by mid-December.

“I do believe the contractor for the middle school is putting forth a good effort to get it done,” Gonzales said. “The high school is a different story. We have or estimation based on the work that has been done and our contracting experience but we’re pushing them to have it done by the schedule that they gave us.”

The total cost for both the new high school and middle school renovation is around $35 million. Around $3 million of that is eligible for reimbursement with COVID-19 relief funds while the rest is being financed through a combination of a 3 mil tax levy and trust certificates.