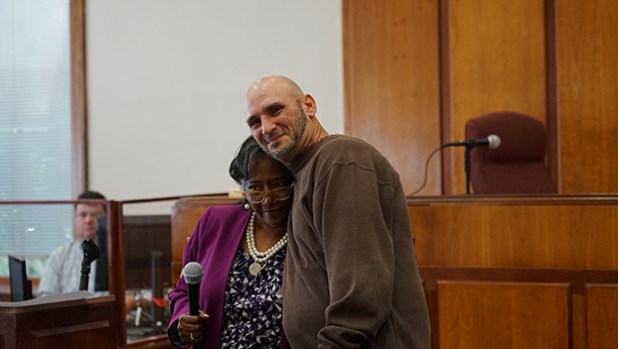 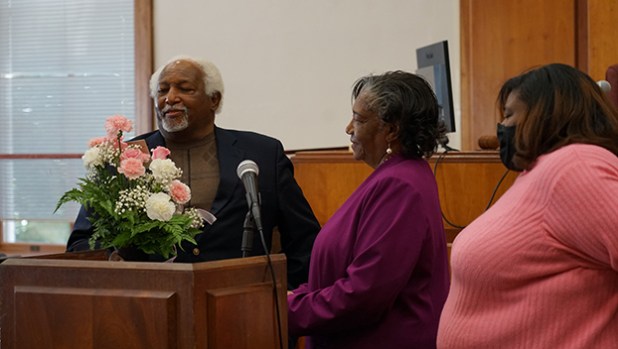 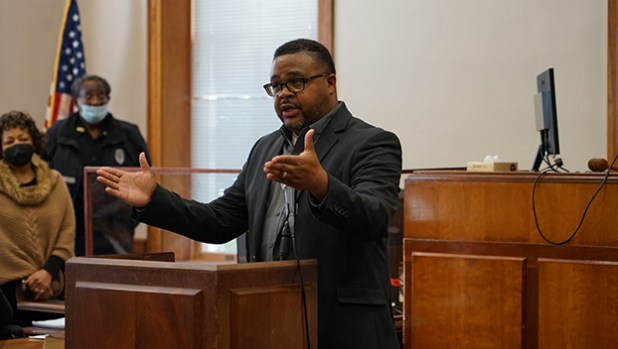 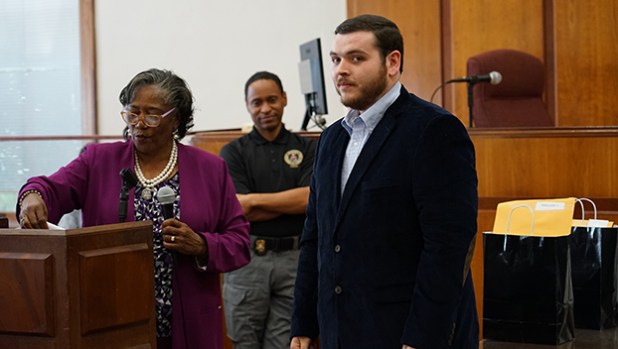 Jonathan Montgomery receives his graduation certificate Wednesday afternoon in drug court after three and a half years of sobriety. (Sabrina Robertson | The Natchez Democrat) 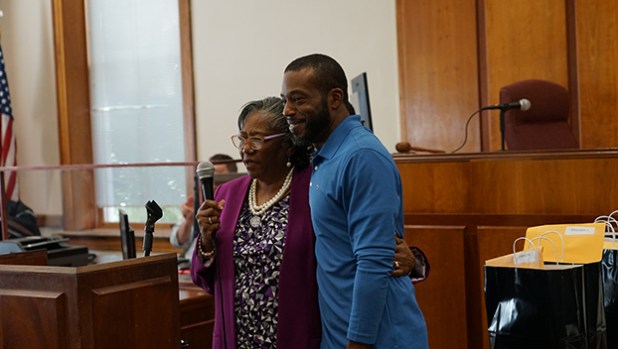 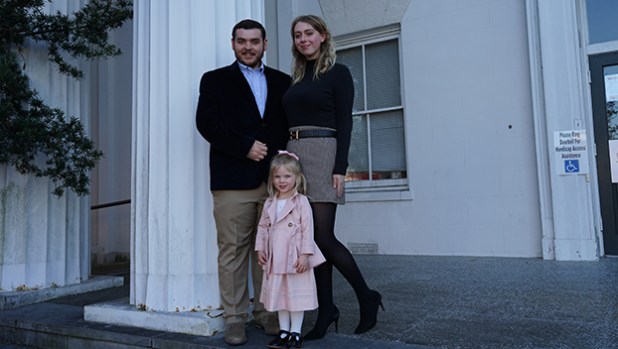 NATCHEZ — Among one of her final acts as a long-time Sixth District Circuit Court Judge, Lillie Blackmon Sanders celebrated 10 graduates from drug court on Wednesday.

Sanders said the drug court program began 18 years ago under her leadership as a judge, but was made possible by a large team that includes her staff, other officials, religious organizations and law enforcement. Since it began, a total of 127 graduates gained a second chance to start over with a clean slate, she said.

As the graduates celebrated the end of a long journey, so did Sanders as her family and members of Sanders Law Firm gifted her with a bouquet of flowers.

She is retiring on Dec. 31 after serving as Sixth District Circuit Court Judge since 1989.

Attorney Carmen Brooks Drake and Sanders’ sister Lydia Roberta Blackmon face each other in a runoff election for the seat on Nov. 29.

Sanders’ parting words to Wednesday’s 10 graduates were, “Be strong enough to stand alone, smart enough to know when you need help and brave enough to ask for it.”

Drug court program participants remain anonymous unless they choose to release their names to the public and share their triumph over addiction to inspire others.

William Zimmerman was one who chose to do just that.

“There are a lot of people who took a chance on me, and I decided not to let any of them down,” Zimmerman said. “These people are here to help. I started this program because I had to. Somewhere along the way, I continued doing it because I wanted to.”

After starting the drug court program, Zimmerman also started a lawn care business and earned an associate’s degree in criminal justice with a focus on forensic science. He said he wants to counsel others like himself who went down a rough road and help them to find their way back.

Another who chose to share his success in the program is Hinson Lewis, who is now leading Narcotics Anonymous meetings.

“You might call us the valedictorians of the class,” Lewis said of himself and Zimmerman. “Chairing those meetings helps me stay accountable.”

Lewis said drugs could’ve killed him, but he got through it.

Jonathan Montgomery, another of Wednesday’s graduates, celebrated his completion of the program and just over three and a half years of sobriety with his family.

Since entering the program, he became a business manager, engaged and a father to a soon-to-be 3-year-old girl. When asked how he did it, Montgomery quickly said, “My daughter.”

“The program is complicated but if you work at it, it works for you,” he said.

Sanders said Wednesday’s class was among the largest group to graduate at one time. The largest class had 16 graduates, she said.

Each program graduate received a watch as a token to remember their hard work and also as a constant reminder to always keep watching, Sanders said.

“I want it to be a contestant reminder to watch the people you spend time with … misery loves company,” she said. “Watch the places you go and watch your actions. … Watch your habits because they become the character and watch your character because it controls your destiny.”