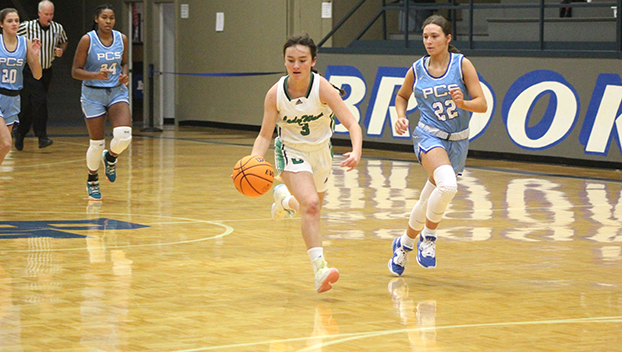 BROOKHAVEN — Cathedral’s Maddie Verucchi scored the first field goal for the Green Wave early in the second quarter of their basketball game Monday afternoon. Presbyterian Christian School girls jumped to an early lead in the Brookhaven Academy Thanksgiving Tournament and raced to a 55-29 win.

Cathedral did not play bad by any means. Presbyterian Christian is a squad that made the most of its opportunities. The Green Wave moved the ball around the court well but had some challenges getting their shots to fall.

Verucchi exited the game in the second half with an injury. She is the team’s point guard and finished with two points. Lily Crum led the team in scoring with nine points while Kinslee Young had eight.

Teamwork is one thing they do well. It is helping with the transition from playing under Bernita Dunbar to playing for Taylor Strahan.

“We work really well, and the seniors are pushing us to play well this year,” Crum said. “We have known each other for a while, so we know how to work together. The 10th and 11th-grade girls know coach Strahan. It helps to know what he likes and how he likes us to play.”

Cathedral’s slow start really hurt them against PCS. Crum said they came into the game not knowing how good of a team they were playing. They hope to turn over the page against East Rankin and play better tomorrow.

Crum said their goal this season is to work well as a team and improve each week. Hopefully, they will win more games as a result.

“I have the same goal every year. I want to have fun and work well on our team,” Crum said. “I want to learn how to be a true teammate with them.”