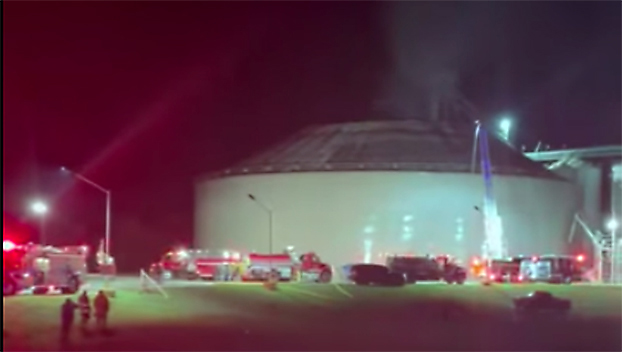 This is a screenshot of a Friday night grain elevator fire from a video shared by Catahoula Parish Sheriff's Office. Several firefighters on scene work to contain the fire.

Residents of the Trinity Road neighborhood that surrounds Bunge Grain were forced to evacuate from their homes for 36 hours due to the possibility of the 1.5 million bushel tank exploding, said Pam Patten, who is the public relations officer with Catahoula Parish Sheriff’s Office.

Video of the fire shared by Catahoula Sheriff’s Office shows multiple trucks and firefighters on the scene Friday night. Click here to view the post.

Residents were cleared to return to their homes at about 2:30 p.m. Saturday when a representative from the Department of Homeland Security deemed it safe.

“They are just asked to stay inside as much as possible,” Patten said. “There was a lot of smoke and the smell was bad.”

Patten said resources from multiple agencies were first dispatched to the fire around 6:30 p.m. Friday. Firefighters managed to contain it to the inside of the tank. No injuries have been reported.

“There wasn’t anything else they could do at that point,” Patten said. Fire specialists out of Baton Rouge were called and arrived Saturday afternoon and removed the top of the grain elevator to reach hot spots.

“Yesterday, they still had some they couldn’t reach,” Patten said. “They were having to get holes in the tank to reach them.”