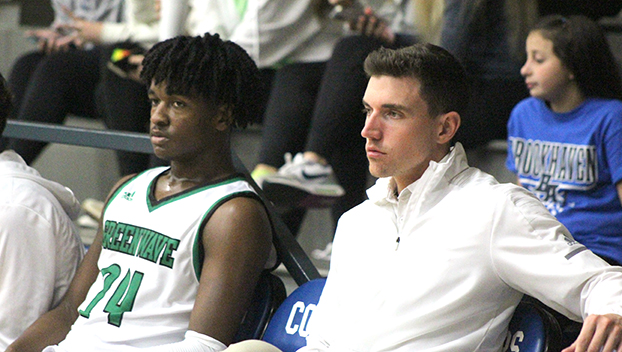 Justin Hawkins and head coach Taylor Strahan sit on the bench in the second half of Cathedral’s first game in the Brookhaven Academy Thanksgiving tournament. (Hunter Cloud | The Natchez Democrat)

BROOKHAVEN — Noah Russ and Mason Moore did not dress out for Cathedral’s basketball game against Presbyterian Christian School due to injuries Monday. Justin Hawkins was healthy and came ready to play in the Brookhaven Academy Thanksgiving Tournament.

He led the team in scoring with 12 points while his teammate Jake Hariston had six. Cathedral lost 84-40 but did not play badly in the first half. They were within one possession in the first half and started the third quarter well. However, Presbyterian Christian, who is a 6A school, was able to wear down the Green Wave and make their shots.

Hawkins said they played pretty well and had good chemistry. Their ball movement and team play helped him on the scoring side.

“I thought we played well, and in the end, we just got tired. They could shoot the ball well too, but we will be good,” Hawkins said. “We have to get in shape and shoot the ball better. We have to work well as a team.”

Hawkins said the team wants to play better and can do so. So far, they have been on the same page and are not letting anyone get down.

He still wears a gold necklace with a picture of his cousin Jordan Herrington, who died in January 2022 in a car accident. Hawkins wore the same necklace this football season and is motivated to play well for him.

“My goal is to win a state championship,” Hawkins said. “We want to do our best to win it for our school and for Jordan.”