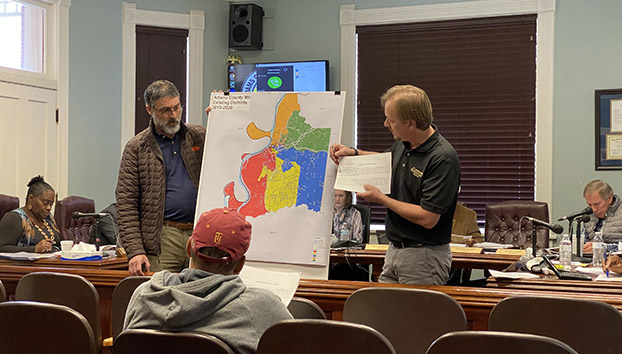 NATCHEZ — The Adams County Board of Supervisors this morning held a public hearing to gather input from constituents on the proposed redrawing of district lines to meet state requirements.

Redistricting is considered after every U.S. Census, depending on shifts in population of each district. Any variance in the shift of population of the county’s districts greater than 10 percent requires redistricting.

Adams County has not had to redistrict since the 2000 census. The variance in Adams County in the 2020 Census or shift in population within districts was 20.29 percent, so the county faces redistricting.

At present, the county’s population is 28,584 residents, which would make the ideal number of residents in each district 5,717. Before redistricting:

In addition, residents in District 2 in an area contained within Main Street, South Pine Street, Washington Street to St. Charles Avenue, extending to Winchester Road to Auburn Avenue and back to Main Street would move to District 4.

Also, residents in District 5 who live within an area bordered by Traceside Drive, Duck Pond Road and U.S. 84 would move from District 5 to District 3.

These changes bring the county’s variance to 9.57 percent and within requirements.

In his second proposal, the seemingly most convoluted of the three, Sanford calls for moving residents from District 2 to District 1 in an area that is west of U.S. 61 bordered by Bourke Road on the west and south and Lower Woodville Road on the north.

Moving residents in an area bordered on the west by U.S. 61 to Melrose Montebello Parkway on the east just past Arrowhead Road and following a line moving south to just past Woodhaven Road.

Then, District 2 would move a portion of its area south of Liberty Road to Jeanette Road to Upper Kingston Road to Ogden Road to MS 555 and bordered on the north by Second Creek.

In addition, three other portions of District 5 would move to District 4.

Proposal 2A would bring the variance to 9.53 percent, within the range required.

In proposal 3, Sanford recommends moving a portion of District 2 to District 3, bordered on the north by Liberty Road to Stanley Davis Road, then a line on the east border south to Jeanette Road near were it intersects with Poplar Grove, following a southern border of Jeanette to Upper Kingston to Ogden Road to Kingston Road to the area of Shelby Drive.

Proposal 3 also takes a portion of District 5 and moves it to District 4, bordering MS 555 on the west, Dave Levite Road on the north, Ivy Lane on the south and on a line back to Dave Levite Road.

And, the proposal moves a two chucks of land in the Morgantown area from District 5 to District 4.

After those moves, the variance in the county between districts is 7.03 percent and well within the required range.

Sanford indicated he thinks Proposal 3 is the one the supervisors prefer.

Supervisors put off voting on the redistricting measure because District 1 Supervisor Wes Middleton was out of town and could not make the meeting. A vote on the measure is expected to take place at the Board of Supervisors’ meeting on Monday, Dec. 5, at 9 a.m.