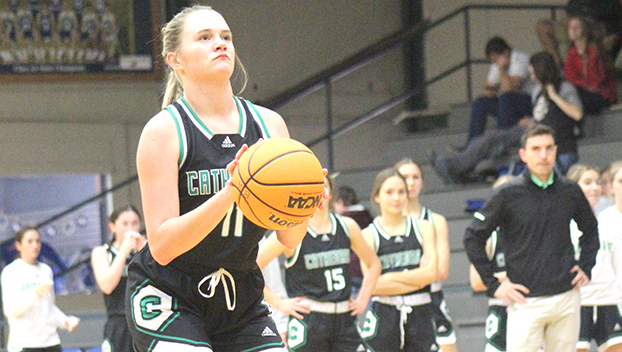 Kinslee Young shoots a free throw during Cathedral's basketball game against East Rankin Academy. She scored nine points for the Green Wave and was a leading scorer. (Hunter Cloud | The Natchez Democrat)

BROOKHAVEN — Cathedral’s girls started their second game of the Brookhaven Academy Thanksgiving Tournament a lot better than their first game. It was not enough to earn a win as East Rankin won 66-36 but it was an improvement heading into Thanksgiving break.

Kinslee Young and Maddie Verucchi tied as the leading scorers with nine points in each. Cathedral eventually hit a dry spell but looked and flowed better than they had against Presbyterian Christian on Monday.

“I think we came more ready. We are coming off of a break,” Young said. “We learned our lesson and we were more motivated and alive. I felt like we played more as a team.”

All of Young’s points came in the first half with five right before the break.A three pointer from the left wing and two free throws at the line gave Cathedral an offensive boost at halftime.

Young said it was good to score and help her team but she felt she could have played better. An ankle injury in the third quarter limited her time the rest of the game.

She also made a big block in the first half which was one of a few in the game. Blocks are one of her favorite things to do in basketball, she said.

“I think one of my favorite things about playing is my height,” Young said. “Getting a block makes me feel like I’m on top of the world when I block a shot. It makes me feel good that it helped the team out.”

She added the sophomores on the team are having to transition from playing junior varsity. Varsity is a little more physical and the speed of the game is quicker. Girls are taller and games are longer, she said.

“I just love the thrill of basketball but softball is my main sport,” Young said. “Softball tends to be slower paced though. I like the fast pace of basketball.”