Green Wave use fast-break to blitz past East Rankin 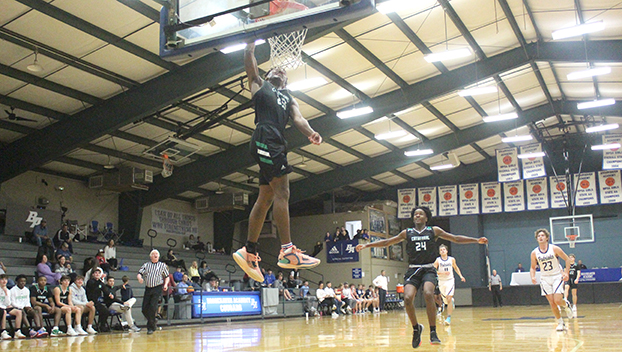 Kaden Batieste dunks a ball against East Rankin enroute to a 56-49 win. He led the team in scoring with 28 points. (Hunter Cloud | The Natchez Democrat)

BROOKHAVEN — East Rankin battled to make the game tight at the end but Cathedral prevailed in its second basketball game of the Brookhaven Academy Thanksgiving Tournament. Cathedral won 56-49 and was able to dribble out the final minute.

“I had a lot of fast break layups, we forced turnovers and I got the ball in transition from my teammates,” Batieste said. “The three pointer is something I get when I shoot with confidence. I shoot well.”

Cathedral endured a lot of pressure in the second half and had a five point game in the final three minutes. They made free throws down the stretch and worked the clock to win.

East Rankin had some bigger players but Cathedral used its speed and boxing out to work the glass. Batieste said bigger players will try to jump over guards and get called for a foul. Cathedral made nine of 16 free throw attempts.

Batieste said the team is bonding well at this point in the season.

“We have pretty good chemistry and we have fun out there in practices and games,” Batieste said. “We have two assistants too. Dewayane Johnson and Agent Griffin they help us out a lot.”