Editor’s Note: A previously published version of this story included misinformation about Shalece Thomas’s warrant from Texas. The story has been updated to remove the error.

NATCHEZ — A Natchez woman who was reportedly shot early Friday morning has died in a Jackson hospital. 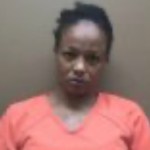 Natchez Police arrested her daughter, 36-year-old Shalece Thomas, after she reportedly fired a single gunshot that hit her mother in the head early Friday morning.

They also discovered Shalece Thomas has a felony warrant for her arrest in Texas for bond jumping.

Natchez Police Chief Joseph Daughtry said Thomas came home to her house at 6 Abbott Street at approximately 2 a.m. and got into an argument with her mother that escalated.

The mother was airlifted to a Jackson hospital in critical condition, where she succumbed to her injury.

Thomas was initially arrested on an aggravated assault charge with updated charges pending.

“I want to commend the shift last night for getting on the scene quickly and detaining someone and detectives as well,” Daughtry said, adding the incident remains under investigation.