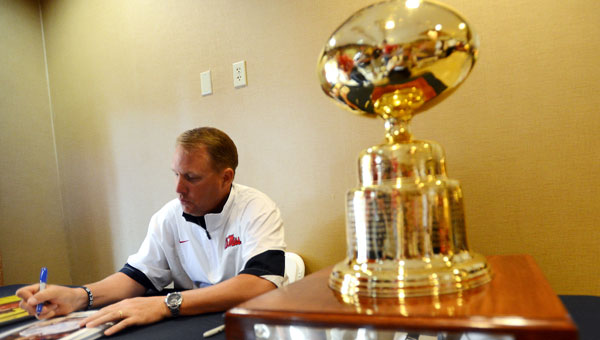 Ole Miss head football coach Hugh Freeze signs an autograph while sitting beside the Golden Egg trophy before speaking at the Vue Hotel in Natchez in 2013. Freeze was on-hand to visit with local fans and alumni and discuss the direction of his program. Freeze later resigned from Ole Miss before taking a job at Liberty. He now is expected to return to Auburn . (Jay Sowers \ The Natchez Democrat)

Auburn is hiring Liberty coach Hugh Freeze to take over the football program, more than five years after his resignation from SEC Western Division rival Mississippi amid both personal and NCAA scandals.

A person with knowledge of the negotiations told The Associated Press on Monday that Freeze has signed a memorandum of understanding with the school. The person spoke to the AP on condition of anonymity because final details of the contract were still being worked out and approved.

Sports Illustrated was first to report that Auburn was finalizing a deal with Freeze.

Freeze went 34-15 in four seasons at Liberty. He replaces Bryan Harsin, who was fired on Oct. 31 after going 9-12 in less than two seasons at a proud program that has fallen on hard times.

Freeze took over at Liberty in December 2018 and the Flames became the second program to win a bowl game during each of its first three seasons in FBS.

His 2020 team finished 10-1 and ranked No. 17. Liberty (8-4) was upset by New Mexico State 49-14 on Saturday in its regular-season finale, losing three straight after knocking off Arkansas.