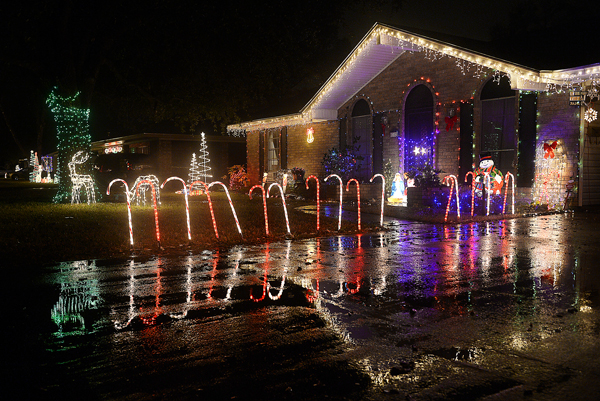 VIDALIA, La. — Heralding the Christmas season, the Vidalia Christmas tree of lights is in place at the city fountain and the Vidalia Garden Club is once again inviting all to participate in its biennial Christmas Lighting Contest as the season’s festivities begin.

Creativity, imagination and family fun are encouraged as lawn decorations are designed and displayed throughout town. Religious scenes or toy soldiers, Santa and his reindeer, snowmen and colorful gift boxes, Christmas trees of bright lights and garlands of greenery – no matter the style – all are included in the judging.

The VGC Christmas Lighting Committee will be judging homes and churches throughout town and the immediate surrounding area on Sunday, Dec. 18.  The judging will include two categories, traditional and non-traditional. Traditional designs will exclude inflatable decorations, but they are acceptable in the non-traditional category.

First and second-place winners in each category will be presented a prize. Certificates of Merit will be presented to any honorable mention winners. Winners will be announced by the VGC Lighting Contest committee.

“This is truly a joyous season,” VGC President Cindy Galloway said, “and we’re hoping that many Vidalia residents and the local churches participate in this long-standing holiday decorating tradition.”

Pam Morace, committee chairman, noted that the Garden Club’s contest is one of several holiday festivities slated in Vidalia this year, including the “Hometown Christmas Festival.”

The Christmas Festival will be held on Dec. 4 on the grounds of the Old Parish Courthouse immediately following the city’s annual Christmas Parade on Carter Street.