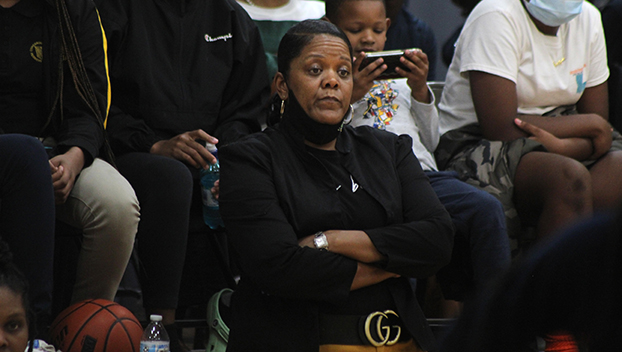 Athletic Director and Lady Trojans head coach Lisa Abron said she enjoys playing in the Sicily Island tournament as it prepares them for the second half of the season. (Hunter Cloud | The Natchez Democrat)

FERRIDAY — The Ferriday High School Lady Trojans are in a position they are not used to being in — having to mix in players returning from last year’s team with players who transferred from other schools.

And that has led Ferriday’s varsity girls’ basketball team to a 1-3 start to the 2022-2023 season. But Lisa Abron, now in her 25th season as Lady Trojans’ head coach, is trying to stay positive and believes her team will find the right chemistry and will be a legitimate contender in LHSAA District 2-2A by season’s end.

“We’re struggling so far this season. We’re trying to work in a couple of transfers. They’re trying to get used to each other,” Abron said. “That’s what we’re struggling with – finding chemistry, the right five out there (on the court). We’ve got plenty of time to find the right chemistry. It’s hard when you’ve got a new set of girls.”

It’s even harder after the Lady Trojans lost eight or nine players to graduation from last year’s team that went 15-5 overall and finished second in district play. Abron pointed out that this year’s team has a lot of skill, but the players are trying to learn each other’s ability.

Ferriday lost at home to Delhi High School on Tuesday, Nov. 15 and at Franklin Parish High School on Friday, Nov. 18. The Lady Trojans picked up their first win of the season on Monday, Nov. 21 at the Wossman Tournament in Monroe, La., a 36-26 victory over Lincoln Preparatory School, before falling to West Monroe High School the next day at the same tournament.

“Delhi beat us in the season opener. We’re looking for a little payback,” Abron said. “They jumped out early on us in the first quarter. We’ll have a different mindset.

Then in the Delhi Tournament, they faced off against Richwood High School on Thursday at 6 p.m.

Ferriday was scheduled to play at Block High School in Jonesville, La. on Tuesday, but those games were postponed due to the threat of inclement weather and will take place on Monday, Dec. 5.

Anashia Hawkins is among the key players returning this season for the Lady Trojans. So is Myla Harbor – but for a very different reason.

“Anashia, she’s a senior. She didn’t start last year, but got a lot of experience, a lot of playing time. She’s our point guard,” Abron said. “We’ve got a new player in Myla Harbor. She played junior high ball in Ferriday, but her family moved away before she could play for me. But I do know here. Now she’s back. She’s a senior. I use her everywhere. She’s about 6-0 tall. She can play guard, she can post. She can shoot it from the wing.”

As for what the goals or expectations are for the Lady Trojans in 2022-2023, Abron said, “We want to be able to compete, more than anything. We want to finish strong in our district so we can get a good seeding. At least get that No. 1 or No. 2 spot for our district. That’s what we’re aiming for.”

Abron said that the Rayville High School Lady Hornets will once again be the team to beat in District 2-2A and that district newcomer Oak Grove High School could be a dark horse team to contend with.

“Rayville is always strong. They’re the defending district champs the last two or three years. I feel like we’re going to compete with them this year,” Abron said. “Oak Grove is new to our district. They have a girl that I’ve heard from one person who said she’s 6-2 and from another who said she’s maybe 6-5. We don’t have anyone to match up with her. We’re going to look out for her. If they have a kid that tall, they have a chance. They’re probably going to be strong.”

She added that her team is taking this season one game at a time and that the Lady Trojans will worry about district play when “that time gets here.”