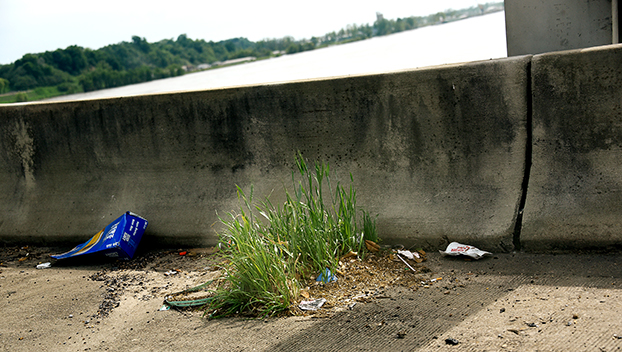 This will make the first time the parish has organized with the Concordia Parish Sheriff’s Office to hire inmates since the pandemic, officials said. By the amount of litter that has been piling up on parish roads, it shows.

“I would rather pay them to do it than it not get done,” Scottie Whittington, a police jury member said of cleaning up the litter. “It’s embarrassing.”

For inmates to work will require a parish employee to become “deputized” or it will require the sheriff’s department to designate a deputy to supervise the inmates during trash pickup. In the past, inmates received an hourly stipend for the work. The rate and number of inmate laborers would have to be negotiated with the sheriff’s office.

“I’ve talked to Chief Fred Middleton and the Sheriff and not that COVID has kind of relaxed and things are opening back up he said it would be fine,” Police Juror Genesia Allen said.

Officials discussed also getting the inmates boots and wet gear to skim trash off of the surface of the water in ditches after it rains.

Allen suggested this as a way they could easily clean up.

Litter isn’t the only trash issue in the parish, according to officials.

“I had a parish resident come by my house today to tell me it had been three weeks since his garbage had been picked up on Moose Lodge,” Police Juror Marie Yearby said during Monday’s meeting. “When I rode through there earlier today, it was bagged. They have a lot of loose dogs back there also.”

Issues with trash pickup have occurred occasionally amid the confusion of transitioning away from a sanitation contract, officials said.

In July 2021, the police jury terminated its sanitation contract with Waste Pro, stating the company violated its contract by failing to pick up the trash in some neighborhoods over multiple days. Instead of contracting with a new company, the parish worked out an arrangement with the Concordia Parish Sheriff’s Office to subcontract trash pickup with Hometown Waste Company at a rate of $15.23 per household for roughly 4,300 households. They also purchased two disposal bins and a used garbage truck for approximately $140,000 so that parish employees and residents could take care of the rest of the trash at disposal sites located in Frogmore and Monterey, saving the parish thousands of dollars on sanitation. Any trash that is not properly bagged up and put into a roadside container doesn’t get picked up, according to the police jury’s trash policy.

In other matters during Monday’s meeting, the Police Jury approved an occupational license for Young Learning Academy, a new daycare facility opening in Ferriday by Shunda Llyod Young.

They also approved advertising a public hearing concerning the fiscal year 2023 budget and engaging Silas Simmons of Natchez to perform the 2022 audit.