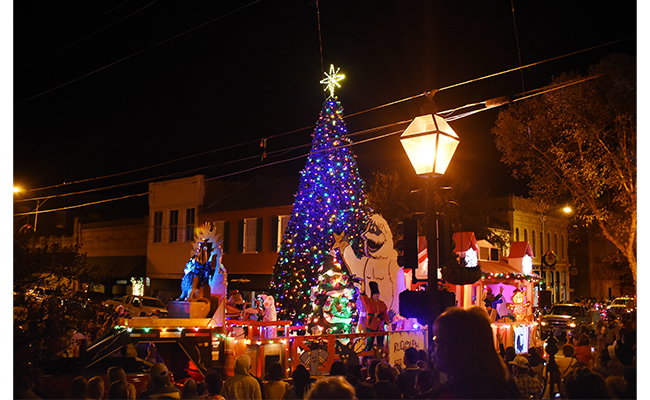 NATCHEZ — Christmas merriment continues in Natchez on Saturday when the Christmas parade kicks off at 6 p.m., followed by the viewing of a free Lifetime Christmas movie, which was filmed mostly in Natchez.

The Natchez Christmas parade lineup will take place on Broadway and the parade will kick off at 6 p.m. sharp.

From Broadway, the parade will continue up Franklin Street to Rankin Street and from Rankin down Main Street back to Broadway.

Curtis Moroney, a member of the Christmas in Natchez group which is responsible for organizing the parade, said registration for participants has been extended through Friday.

“There is a $30 fee and people need to register so they can fill out a form and provide insurance information,” he said.

Parade participants may register by stopping by the Hampton Inn of Natchez on Canal Street and asking for Patricia Cothren, Moroney said.

Following the parade, the City of Natchez has made arrangements to host a free showing of A New Orleans Noel, the original Lifetime original movie filmed in Natchez and starring Keisha Knight-Pulliam and Brad Jones with Tim Reid and Patti LaBelle.

Many Natchezians took part in the film as extras and a number of Natchez businesses were part of the movie as either providing locations or goods and services. Others got to see the filming at a number of city venues.

The movie begins at 7:30 p.m. upstairs at the Natchez Convention Center.

While the movie is free of charge, voluntary donations will be accepted at the door for the Natchez-Adams Humane Society.