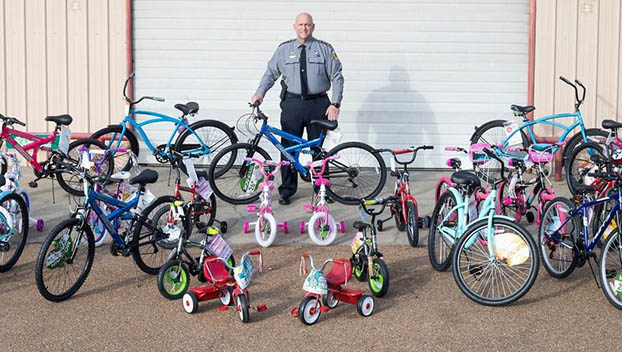 Concordia Parish Sheriff David Hedrick with new bicycles that were given to parish children in 2021. (Submitted photo)

VIDALIA, La. — One of the greatest thrills for a child is finding a new bicycle under the Christmas tree on Christmas morning.

A longstanding tradition of the Concordia Parish Sheriff’s Office ensures every child may receive a bicycle for Christmas, whether or not their families are able to buy them.

The tradition began with the sheriff’s office collecting used bicycles behind the courthouse to refurbish, but as of last year things have changed, said Brandy Spears, the public information officer for CPSO.

“We no longer accept used bikes as donations,” she said. “As of last year, we started taking monetary donations only so that we can purchase brand new bikes.”

The last day for parish residents to fill out an application at the sheriff’s office for their child to receive a bicycle is Friday, Dec. 2, before 4:30 p.m. However, the CPSO accepts donations to the Concordia Parish Sheriff’s Office Bicycle Fund at any time of year.

Because the bicycles given away in 2021 were brand new, CPSO asks anyone who received one last year to wait at least two years before applying again.

Last year, with the community’s support, the sheriff’s office gave away 166 bicycles.

“We try to make sure each person that applies gets one,” she said.

The bicycles will be distributed between 9 a.m. and noon on Dec. 15 and 16 at the Concordia Parish Courthouse. Parents will be called ahead of time and be told what time they should arrive to pick up a bicycle.

Monetary donations can be made out to the Concordia Parish Sheriff’s Office Bicycle Fund and dropped off or mailed to CPSO at 4001 Carter St., Room 7, Vidalia, La., 71373.