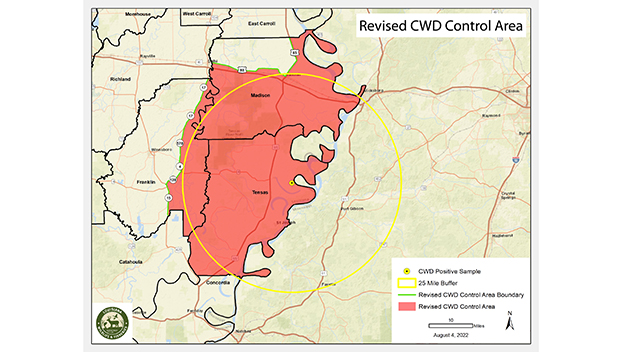 Mississippi, Arkansas and Texas each have multiple positive detections of the 100 percent always fatal neurological disease which is caused by an infectious prion, a mis-folded protein. CWD is contagious to members of the cervidae family such as deer and elk although it is unknown if it poses any threat to humans. The Center for Disease Control recommends hunters avoid eating meat of CWD positive deer.

Bordelon has worked on several versions of an action plan for fighting CWD over the past 20 years once it was detected in Louisiana. This plan was based on the best practices for managing the disease which calls for surveillance by hunter harvests to detect the disease in new areas as it spreads.

“We have collected more than 1,200 samples through November 30, 2022. We have received results from 604 of those cases with an additional 612 awaiting results,” Bordelon said. “There are no detections in any of the samples collected up to this point.”

This year alone, 180 samples have been collected from the CWD Control Area made up of Franklin, Madison and Tensas Parishes. Bordelon said they are well on their way to a goal of 300 for the control area.

LDWF will actively work Tensas National Wildlife Refuge the weekend of December 10, 2022 to collect additional samples. There is a mandatory deer check for hunters on Tensas NWR that weekend. He said they plan to be close to 300 by the end of that weekend and will continue to collect samples for the remainder of the season.

Union and Morehouse Parishes are adjacent to a CWD positive detection in South Arkansas and were an area of concern last year. Bordelon said they have yet to detect any positive cases of CWD there.  They were able to collect 300 samples there so far this season.

“We have results on over 300 samples with approximately 25 recent samples awaiting a result. No CWD detections yet,” Bordelon said.

To date, 1,803 CWD samples have been submitted in Mississippi this year with 15 positive detections. The majority of those detections were in North Mississippi in Benton County where it is a hotbed for CWD.