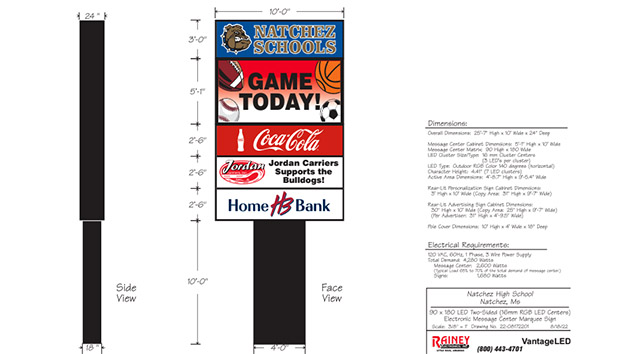 A previously proposed sign for Natchez High and Middle schools, based on a Hattiesburg school sign, has been shot down by the city planning commission. (Submitted)

NATCHEZ — The Natchez Adams School District answered the City of Natchez Planning Commission’s disapproval of its proposed marquee for the entrance to the district’s new high school and middle school campuses by heading back to the drawing board.

During a special called meeting on Wednesday morning, the school board tabled its vote on the sign and members said they would do a complete redesign and produce one more aesthetically pleasing.

The original concept included a large advertisement area for three area businesses that sponsored it, Coca-Cola, Jordan Carriers and Home Bank. Together the advertising space took up more area than the Natchez School logo, officials noted.

At a recent meeting, three out of five members of the city planning commission shot down this proposal, stating that the off-site advertising for the businesses was too much.

Planning commissioners who voted in support of the sign were Mildred Chapman and Charles Harris. Those who voted no on the sign were Jonathan Smith, Marsha McCullough and Deborah Martin.

“I don’t want us to be asking the Board of Aldermen to overrule the planning commission on something we approve of in the first place,” he said.

“This is our greeting card,” she said. “It needs to be something that represents our schools. I want the whole community to love it. I want them to ride by and be proud that this is Natchez High School.”

Officials discussed what they would like the new sign to look like and asked NASD Public Engagement Coordinator Tony Fields to come up with three different picture examples of signs for inspiration to present at the next board meeting.

They said the brickwork around the sign should match that of the new high school and discussed having an LED display that would shuffle through the advertisements for the sponsors rather than displaying all three ads at the same time. It will also be able to promote school sporting events and other activities.