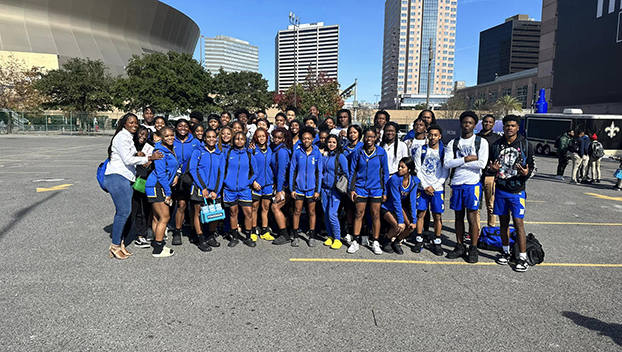 Natchez High School’s girls and basketball team visited New Orleans Wednesday to play Sarah T. Reed in a game at the New Orleans Pelicans arena. It was a great experience as both teams won their games and kids were able to explore parts of the Big Easy. (Courtesy Photo | Natchez Athletics)

NEW ORLEANS — Head Coach David Haywood took his boys team on a second trip to New Orleans, and it was rewarding on and off the court. Natchez High School beat Sarah T. Reed 57-44 after Presten Jackson scored 20 points for the Bulldogs.

Haywood said they played a good Sarah T. Reed’s squad and one of the Olympian players was top ranked in the state for recruiting. As the game went on, the Bulldogs were able to get a feel for the environment and settled in on defense, which led to the offense scoring more buckets en route to a win.

They travel to Vicksburg Friday night with a 6-2 record. The Gators should be a tough test for the Bulldogs early on in the season.

“I think every game gives us a little more confidence, and we are constantly trying to build,” Haywood said. “Over the next two weeks to a month, I plan on us developing into a pretty good squad and making a run in the playoffs.”

Natchez’s trip to New Orleans saw a tour of the New Orleans Pelicans facilities, the Riverwalk Mall and visits to two universities in the Big Easy. Haywood said when the team returned to Natchez he spoke with administrator Cleveland Moore about the trip. He added there needed to be more trips like that and not just for athletics.

“We have a lot of kids who live here in Natchez and Adams County who don’t get to see outside of Natchez,” Haywood said. “Watching them explore the mall and watch the cruise ships, it was all new. I want to expose kids to experiences like that as much as we can. Hopefully, we can put a plan together and get some more field trips together for our kids. It might change a kid’s mind if he can see something outside of Natchez. I saw a sparkle of excitement in their eyes.”