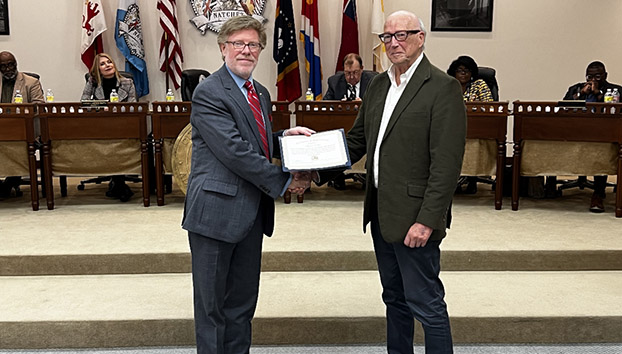 Mayor Dan Gibson, left, presents Al Walker with a certificate of appreciation following Walker's donation of a plot of land across the street from the entrance to the city cemetery. Walker’s donation is in memory of his late partner, Keith Hall Karlson. (Photo courtesy Dustin Hinkle)

NATCHEZ — Alfred J. Walker, known to most of his Natchez friends as Al, has donated a plot of land across from the main entrance to the Natchez City Cemetery in memory of his late partner, Keith Hall Karlson.

Walker and Karlson moved to Natchez in 2006 from Bay St. Louis after Katrina. Karlson, who was 67 at the time, died from injuries suffered in a tragic fall in 2016. A graduate of Tulane University School of Law, and Tulane School of Social Work, Karlson worked as a clinical social worker for Southwest Mississippi Mental Health Complex in Natchez.

Walk said Karlson enjoyed a walk each morning on the bluff

Walker presented the gift of the land located at 802 Maple St. to the Mayor and Board of Aldermen at its evening meeting on Nov. 22.

The land is now home to an 1,800-pound granite statue of an angel, sculpted by Obadiah Bourne Buell of Sullivan, Maine, which sits on the property, which Walker calls the Keith Karlson Overlook, and is part of Walker’s donation.

“Keith walked four miles in the city every morning, particularly along the bluff. I thought this property, which I call the Keith Karlson overlook, would memorialize his essence in the city. It has wonderful views of the river and Louisiana beyond and is the perfect place to contemplate life and death,” Walker said.

Along with the gift of the land and sculpture comes the design for a columbarium, which Walker said he has suggested for the property. A columbarium is a structure containing small compartments for holding urns of cremated remains. Walker suggested constructing a columbarium on the property would provide a healthy revenue stream for the cemetery over time.

“We are running out of space in the cemetery and there is more and more interest in cremations,” Walker said. “What more beautiful spot than this one overlooking the Mississippi.”

The design for the columbarium Walker suggests is similar to that found at the Mepkin Abbey in Moncks Corner, S.C., home to an order of Trappist monks, located along the Cooper River.

Terry Stutzman, president of the cemetery’s governing board, thanked Walker for his generous donation.

“We are very grateful to him for his generosity. We look forward to using it in a way that honors his partner, Keith Karlson, making it a nice memorial place for him and a place that enhances the beauty and serenity of the cemetery,” she said.