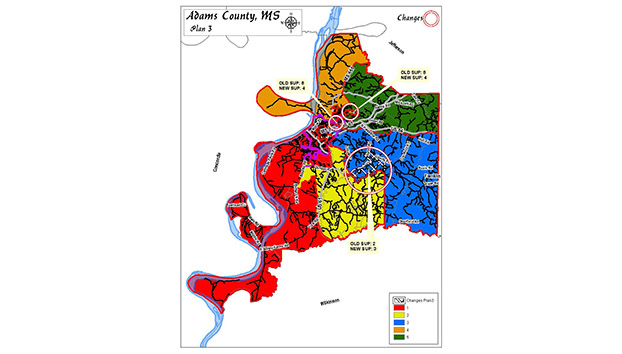 NATCHEZ — With little fanfare and less discussion, the Adams County Board of Supervisors voted to redraw district lines to correct population shifts detected in the 2020 U.S. Census.

Any variance in the shift of population of the county’s districts greater than 10 percent requires redistricting.

Adams County did not have to draw new district lines after the 2010 census because the variance in shifts among districts was less than 10 percent. The county’s population variance after the 2020 census was 20.29 percent.

At present, the county’s population is 28,584 residents, which would make the ideal number of residents in each district 5,717. Before redistricting:

• District 1 has 5,918 residents, 201 more than ideal. District 1 is represented by Supervisor Wes Middleton.

• District 2 has 6,163 residents, 446 more than ideal. District 2 is represented by Supervisor Kevin Wilson.

• District 5 has 6,189 residents, 472 more than ideal. District 5 is represented by Supervisor Warren Gaines.

On Tuesday, supervisors opted for Proposal 3 of the bunch, which moves a portion of District 2 to District 3, bordered on the north by Liberty Road to Stanley Davis Road, then a line on the east border south to Jeanette Road near were it intersects with Poplar Grove, following a southern border of Jeanette to Upper Kingston to Ogden Road to Kingston Road to the area of Shelby Drive.

Proposal 3 also takes a portion of District 5 and moves it to District 4, bordering MS 555 on the west, Dave Levite Road on the north, Ivy Lane on the south and on a line back to Dave Levite Road.

And, the proposal moves another two bits of land in the Morgantown area from District 5 to District 4.

After those moves, the variance in the county between districts is 7.03 percent and well within the required range.

The distribution of population per county district in Proposal 3 is: