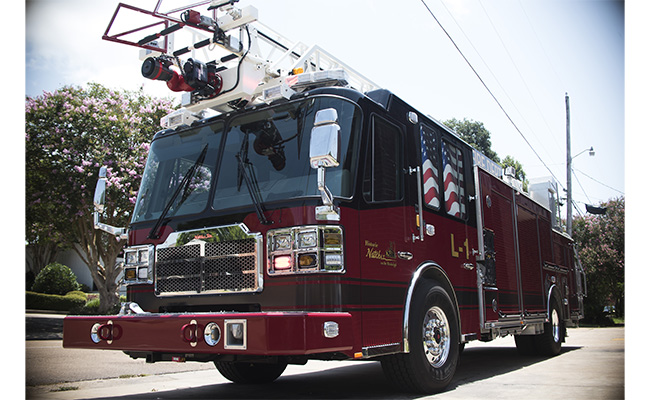 NATCHEZ — Santa found his way at the front of the Natchez Christmas parade on Saturday night. Typically, Santa makes his appearance at the end of the parade.

However, the Natchez Fire Department truck he was riding on was at the front of this year’s parade in the event it was needed to fight a fire.

If that had been the case, Santa would have had to make a quick exit and the fire truck would have needed to hop out of the parade line up to go do its duty.

Natchez Fire Chief Robert Arrington said using an on-duty truck in this year’s parade was necessary for a couple of reasons.

“It’s a combination of things. We do have some trucks with some mechanical issues, and our manpower is not where it needs to be,” Arrington said. “That’s why we were using a front line engine to cover the parade.”

The city has a total of six fire trucks. Two are out of service at this time.

“One is down with bad mechanical issues. The other has minor issues,” he said.

The city department is budgeted for 50 firefighters. It is down nine firefighters right now, Arrington said.

Those firefighters are distributed between the city’s four fire departments — one on Main Street, another on Wood Avenue, one on John R. Junkin and another on Vaughn Drive.

The city’s fire department is also contracted with Adams County provide fire protection in the county, alongside the county’s volunteer fire service.

“The need for firefighters is evenly distributed between all of our fire stations. When we need people, we fill in as needed to keep everything evened out,” he said.

The pay for city firefighters could be an issue — starting pay is just under $30,000 — but Arrington said pay is not the only reason the city department is having difficulty hiring firefighters.

“I think pay is part of it, but there is a shortage of people nationwide. The departments that pay huge amounts of money are having trouble hiring people,” he said.

Even though starting pay may be considered low, those interested in a career with the city’s fire department should know the benefits package is outstanding.

“We provide full benefits and I am told PERS is one of the best retirement systems around,” Arrington said.

In order to become a Natchez firefighter, anyone interested should apply at the city’s Human Resources department at City Hall.

“They have to pass the Civil Service exam and interview and clear a medical and drug test. After that, we can hire them and do pre-training for the academy,” Arrington said. The firefighters’ academy is in Pearl.

He said equipment and personnel issues are being worked out.

“We are trying to get grants for new trucks and new equipment. We are also exploring all the avenues we can to hire more people,” he said.

The fire chief said residents should not be concerned about the department’s response in the event of a fire.

“We are always going to answer the call. We have enough equipment to do what we need to do. Having extra is great, but as far as us making responses, we are fully equipped,” Arrington said.