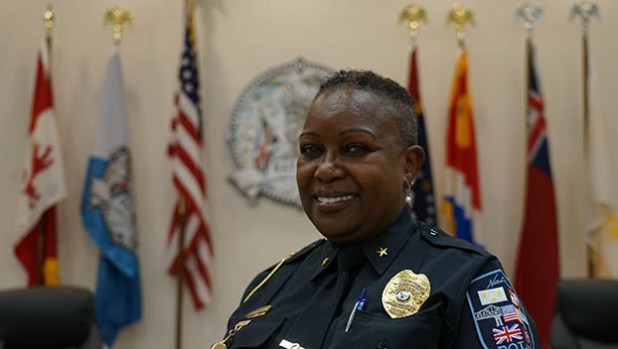 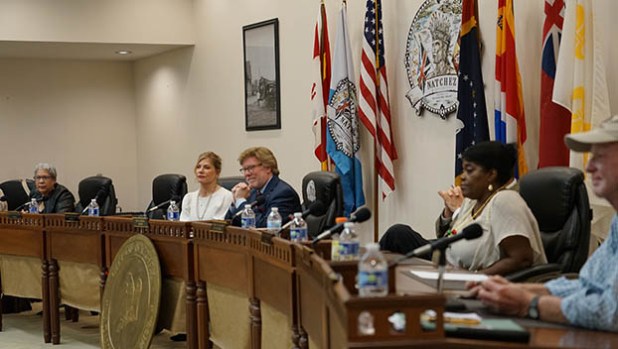 Natchez Mayor and Board of Aldermen at Tuesday's meeting.(Sabrina Robertson | The Natchez Democrat) 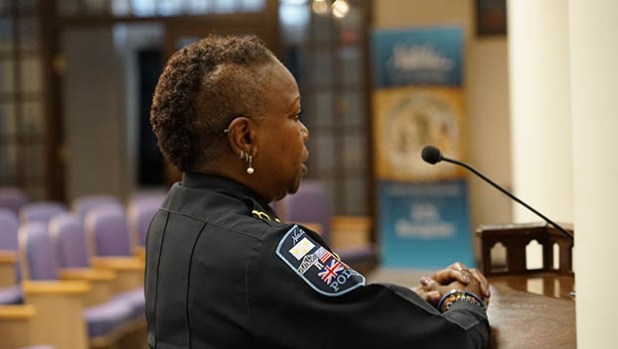 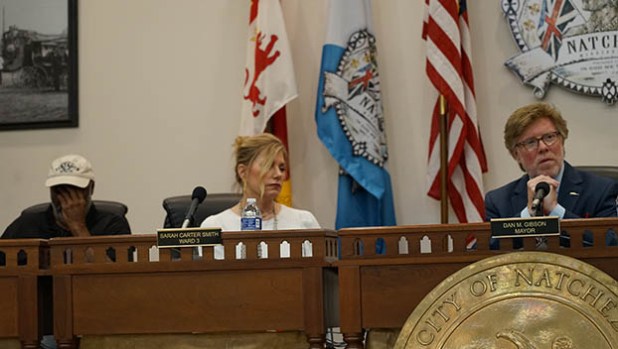 Alderman Billie Joe Frazier, left, has his face in his hand during Tuesday's meeting. (Sabrina Robertson | The Natchez Democrat)

As soon as Clerk Megan Edmonds finished the roll call of Tuesday’s special called meeting, Alderwoman Valencia Hall made a swift motion to appoint Green to lead the department, as current Chief Joseph Daughtry accepted a police chief’s position in the City of Columbus to begin Jan. 1, 2023.

But before the vote was finished, Frazier attempted a motion to enter an executive session to discuss the matter further; however, Gibson said the aldermen had to dispense with Hall’s motion first.

The aldermen had a choice of three candidates they interviewed for the position who each currently works within the department. The other two candidates were Justin Jones and Jerry Ford.

Frazier and Irving both said during the discussion that they thought there would be another discussion in an executive session before a vote was made.

Irving pointed out that the department has had a “high turnover of over 28 officers” since Daughtry was hired as police chief in 2020 and said hiring someone without a long tenure at NPD would bring “even more divisiveness to that department,” she said.

Green worked at the Adams County Sheriff’s office from 2004 to March of 2021, when she rejoined NPD at Daughtry’s request, Green said.

“We need someone with more experience, who has been there, well-rounded and we have those candidates. I strongly suggest we take a further look before we make that decision tonight,” Irving said.

“This is a sham,” Frazier said. “It was already planned from the start of Chief Daughtry turning his resignation in. Anytime you hear it on the street committee, it comes from City Hall itself, that it was your plan to make Ms. Green your interim chief. As (Irving) states, we have other qualified personnel. I don’t have anything against Ms. Green. I love her. We go a long way back. But as she stated, this is nothing but divisiveness that we have in this department. When you start doing this, it’s going to create more problems. We’re already at a critical point where we’re losing officers from the other chief. I don’t want to be critical of this administration because I’m part of it, but I will say this. We have a police department that is in shambles.”

After the meeting, Dillard said he also thought there would be another discussion of the candidates before the aldermen voted.

“I evaluated the three along the lines of civil service standing, rank, education and experience and thought the best candidate was Justin Jones,” he said.

While each candidate has 20-plus years of law enforcement experience, Dillard said both Ford and Jones have bachelor’s degrees in Criminal Justice and have been tested at the civil service level.

“But we each only get one vote and now that the vote is taken, we have to work together to shore up and strengthen the department as best we can,” he said.

Gibson said he hoped to avoid a tie vote and disagreed with Frazier that the vote was a sham and “that our department is in shambles.”

“We have three excellent candidates and I have the utmost respect for each one,” Gibson said. “Being chief requires a certain temperament. Cal Green has demonstrated that she has that temperament. Also being chief definitely calls for experience. Commander Green is the only one of these three who has experience at both the police department and also the sheriff’s office. In addition to that, she also—in terms of years of service—has the most years of service having served the citizens of Natchez and Adams County for now over 26 years.

Gibson later added, “I don’t throw around words carelessly. I will say this. ‘Shambles’ is not the word I would use to describe our department that is making great strides. We’re going to make even greater strides in the months and years to come.”

Green used her opportunity at the podium to address some of the comments the aldermen made.

“First and foremost, my loyalty has always been to the people of Natchez and Adams County,” she said. “My entire law enforcement career has been right here at home. It has not been someplace else. It takes a lot to get me emotional and I am more than just a little bit right now. I will never cheat myself out of doing the best job I can do. I have never given anything less than my very best to any job that I have taken on and I’m not going to start now. I recognize and appreciate everybody’s feelings and opinions and will do my best to alleviate your concerns. That is the best that I can do.”