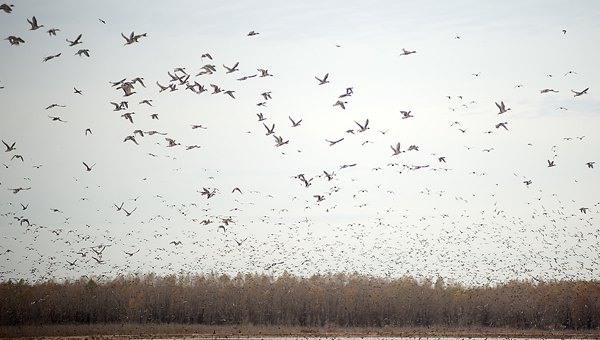 Brittney Lohmiller / The Natchez Democrat — Thousands of ducks fly in between levees at St. Catherine Creek National Wildlife Refuge during their migration to the lower Mississippi River. Green winged teal, gadwall, pintail and mallard are among the different species of ducks that will migrate to the refuge.

Louisiana Department of Wildlife and Fisheries

HPAI has been detected in wild birds, domestic poultry, or both in 49 states and resulted in the death of over 3,000 wild birds and nearly 48 million domestic birds (poultry). Waterfowl can become sick and die from the disease, however, many birds are carriers that do not show clinical signs. LDWF routinely investigates reports of sick or dead bird events if large numbers are impacted. Waterfowl species and pelicans are among the birds that the disease is affecting.

The Mississippi Department of Wildlife, Fisheries, and Parks (MDWFP) has received many reports of sick or dead birds over the past week. MDWFP staff has assisted USDA Wildlife Services with taking samples from some of these reported birds to submit for HPAI testing, and positive cases are expected to rise when results are received.

Most of the reports so far have involved sick or dead snow and Ross’s geese, but other species have also been impacted.

The Center for Disease Control considers H5N1 HPAI a low risk for public health. While the virus presents a low risk to humans, it is important to avoid contact with sick birds. Also, be mindful that hunting equipment may transport the virus. If you hunt waterfowl and have backyard poultry, plan for added biosecurity measures  (http://www.bah.state.mn.us/media/HPAI-Notice-Backyard-Final.pdf) to keep your flock healthy.

Some general safety guidelines for hunters and others handling wildlife and their tissues include:

Some other protective measures include:

LDWF is continuing to monitor for HPAI throughout the state as will the MDWFP in Mississippi.

Other sources of information concerning HPAI can be found at the following links: