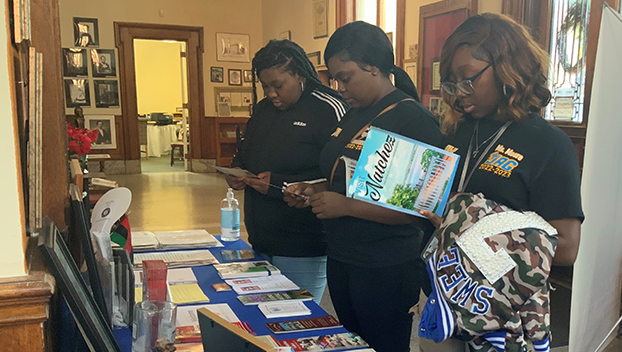 “This is the first group I’ve had from Ferriday Junior High School,” said Dennis. “Over the years, I’ve had groups of students from Natchez and from as far away as Jackson. We really enjoyed our time together. It was a great opportunity for them to learn about history that is often neglected.”

“The tour was very informative,” said Moore. She noted it was an “eye-opener” for the students.

“Some of them had never visited Natchez,” she said. “This was a great opportunity for them to get to know about African American history and their culture. They loved how they were able to see real artifacts in the museum.”

Overall, Moore said, it was a great experience for them.

The students arrived at the museum around 9 a.m. Thursday, Dec. 8. They spent an hour learning about African American history in Natchez. In addition to watching a 15-minute video on African Americans in Mississippi, the students carefully examined historical artifacts and displays throughout the museum. Throughout the tour, they asked questions about various items, according to Dennis.

The tour ended with a presentation by Dennis on “Finding Self-Awareness in History.”

Dennis said the tour was delightful.

“I always like to have young people in here,” he said. “They’re my favorite group because I learn something every time they come in here.”

Although several things caught the student’s attention, it was the military exhibits, particularly the display of the Natchez U.S. Colored Troops that generated the most interest.

“They were fascinated by this,” Dennis said. “These are things they’re not exposed to often enough. There were quite a few comments on an aviation training kit, a pilot kit similar to one used by the Red Tails.”

“Red Tails” was the name given to Tuskegee Airmen because of the painted tails of their fighter planes.

Warner, one of the teachers, inquired about the history of Nellie Jackson and the Rhythm Night Club fire of 1940 that left over 200 people dead, including Walter Barnes and members of his band.