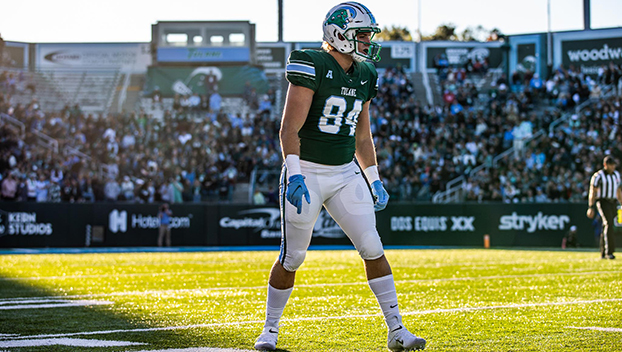 A former Cathedral alumnus, Wallace plays as a tight end at Tulane University. The Green Wave will play in the Cotton Bowl this year against USC. It is a big game for the Green Wave who lost to No. 2 Oklahoma last season after being displaced by Hurricane Ida, the Sooners were coached by USC coach Lincoln Riley. (Courtesy Photo | Tulane University Athletics)

NEW ORLEANS — Tulane tight end and Cathedral graduate Will Wallace has waited six years to get to one of the grandest stages in the bowl season. After beating the University of Central Florida in the American Athletic Conference Championship, Tulane (11-2) earned a berth in the Cotton Bowl where they will play the University of Southern California (11-2)

COVID and a redshirt year allowed Wallace to stay for six years with the program. Last season’s record looks like a terrible year, but they lost by seven points or less in five of those games. People forget Hurricane Ida, a category 4 storm, struck the city of New Orleans right before Tulane’s football season started. The team was displaced for about a month and they lived in a hotel in Birmingham, Alabama, where Wallace was born.

“It was surreal. The hurricane was a bonding experience. When you are staying in a hotel, eating and practicing together for 30 days, you have to get close with the guys,” Wallace said. “There was no school because they canceled classes. It was just football. It was a bonding experience, and I think it helped us in our off-season before this year. We learned to love one another.”

Birmingham might be where Wallace was born, but he spent his high school years in Natchez at Cathedral. He said Natchez is one of the reasons he is the person he is today, specifically because Cathedral had a hand in molding him.

Ron Rushing, who now coaches at Parklane Academy, was a great example. Line coach Kurt Russ helped shape Wallace as did Craig Beesley, who was the head baseball coach and athletic director.

Cathedral made an impact because its football program was good and the academics challenged him, so when he got to Tulane he was prepared. He added Tulane’s culture of emphasizing athletic and academic success was similar to Cathedral’s.

“It worked out perfectly. Green Wave for life,” Wallace said.

Working out perfectly is one way to describe Tulane’s season this year. Wallace has seen the culture of the program grow. The Green Wave are a player led team. Even last year when they lost games by one possession or more there was a belief they could still do big things.

Wallace said the off-season was the biggest transformation. They worked hard and stuck together in a time when players could have hit the transfer portal.

“This season is what we owe our fans. We wanted to go out on top. We are going to do the best we can,” Wallace said. “Our saying in the locker room was ‘This is the Revenge Wave tour.’ We never beat UCF, SMU or Cincinnati. We all felt like we could have beaten Oklahoma last year. It was supposed to be at home and we had to play there and lost by five points. We want revenge on Lincoln Riley. We remember that game, it hurt us a lot.”

Tulane will play USC in the Cotton Bowl January 2, 2023 at the Dallas Cowboys Stadium. It will be the fourth meeting between the two teams. USC has won three of those meetings including the 1932 Rose Bowl.

The Green Wave have reached 14 bowl games in their history, winning six of those appearances. This will be the first Cotton Bowl appearance for the Green Wave.

“It is what I have dreamed of. Going to a small school like Cathedral, people tell you it is not possible. It is a dream come true and we get to play against a school I dreamed of,” Wallace said. “Nick Anderson was our leader this year. Our standard was the conference championship. This was not a big surprise for us, we expected to be here. It meant the world to us to celebrate with our students in the Conference Championship. Everyone has bought in. The program means a lot in the community. It means the world to be on this stage now. We are playing for the past players. There is so much tradition here. To have success this season was just awesome, we were due.”

Tulane has won nine conference championships since it first fielded a football team in 1893. Three of those championships were won during its 33 year tenure in the SEC.

Wallace is nearing the end of his college career. After this football season he will be out of athletic eligibility and by this spring he plans to graduate with a Masters in Business Administration. He already earned a degree in Real Estate from Tulane.

His next step is to prepare for Tulane’s Pro Day held at the school. He is unsure yet if he will receive an invite for the NFL combine but he does hope to have a shot at playing in the NFL. The six foot-four inches, 230 pound tight end has made his mark on the Green Wave as a blocking tight end. While he is able to catch the ball, 31 receptions, 338 receiving yards and four touchdowns, he has faced some injuries limiting his role.

“I want to play in the NFL and my MO is going to be a blocking tight end. We will have pro day here so I will be training for that day,” Wallace said. “At 24, I have played a lot of football. I would use my Tulane degree to get a job in business or finance if I don’t reach the NFL.”