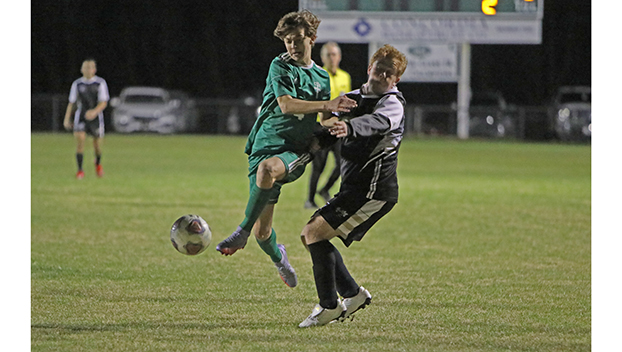 MCCOMB — Grayson Guedon had a hat trick in the first half and John Carter Austin added two goals of his own as the Cathedral High School Green Wave cruised to a 6-1 win over the Parklane Academy Pioneers last Thursday night.

Green Wave head coach Dennis Hogue said it was a big win for his MAIS Division II team over one of the ‘big schools’ from Division I. However, he did add that of all of the teams in Division I, Parklane is the weakest.

“I am particularly proud of that. They (Parklane) has some talent. But our defensive end is our strength,” Hogue said. “I always tell them before the game starts, ‘If they can’t score on us, they can’t win.’ All we need is one goal to beat them.”

Of the six goals that Cathedral scored — all of them in the first half — only one was unassisted. And that was Verucchi’s goal.

“Matthew’s goal was a mishandled ball on an opponent. They couldn’t clear it out. Other than that, all the other goals were beautiful assists by other players. I just can’t remember who they were,” Hogue said.

With such a commanding lead, Hogue put in some of his junior varsity players in the second half. However, he did keep his starting defense in to try to preserve the shutout. He also made a change at goalkeeper.

Chance Bertelsen didn’t have too many save opportunities because Parklane had very few shots on goal in the first half. Bertelsen finished with three saves. Scott Gwin played goalkeeper in the second half and ended up with seven saves, but the Pioneers had more shots on goal and were able to score their lone goal on him.

All in all, Hogue said he was “super pleased” with his team’s performance against a team from a higher classification.

“Everybody played well. They communicated well. Even our best ball handlers were unselfish,” Hogue said. “We’ve got a team full of shooters. They played smart. They played patiently.”

Porter’s Chapel Academy was on Cathedral’s schedule before the season began, but because of some roster issues, the Eagles ended up canceling most of their season, leaving Hogue looking for opponents to fill that void. Unfortunately, that would not be the case.

“We had a game scheduled with them (PCA) for next week. Their coach said they didn’t have enough players. He said when we scheduled them, they barely had enough players to play. They had 11 to play and then two of them quit the team. Then three more players got the flu. So they had to pull out,” Hogue said.

Hogue then went on to say that he tried to call some MHSAA teams from the McComb and Brookhaven area, including Brookhaven High School, as well as Franklin County High School and even schools in the Alexandria, La., area, but their schedules were full.

“We’re going to practice between now and then so they don’t get bored,” Hogue said.