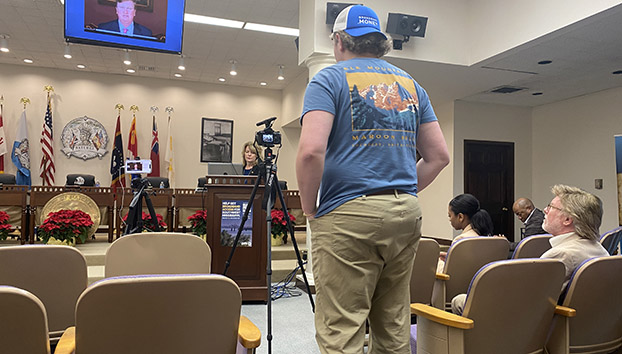 At the podium, former State Sen. Sally Doty of Brookhaven, now executive director of Broadband Expansion and Accessibility of Mississippi, speaks during a press conference in Natchez on Monday afternoon. Seated at right, Natchez Mayor Dan Gibson watches a video clip of Mississippi Gov. Tate Reeves, which was shown at the beginning of the press conference. (Jan Griffey | The Natchez Democrat)

NATCHEZ — Former State Senator Sally Doty of Brookhaven was in Natchez Monday afternoon to urge residents to go to their computers and take an online test to measure the strength of broadband service here.

Doty is heading up a new state department, created by Gov. Tate Reeves, to ensure Mississippi garners its share of federal dollars coming available to increase access and speed of Internet service.

Doty is executive director of Broadband Expansion and Accessibility of Mississippi.

At a press conference held Monday afternoon in the city’s Council Chambers building at 115 S. Pearl, she said one of the top efforts of her office right now is to create an accurate Mississippi Broadband Map of where the state is well served by internet service providers, and where it is not.

The Mississippi Delta and Southwest Mississippi, which includes Natchez and Adams County, are among some of the worst served areas in the state, Doty said.

A huge amount of federal dollars to improve broadband will be coming to Mississippi sometime in 2023. How much the state receives is dependent on Doty’s office’s ability to accurately show the need for broadband service in Mississippi.

“The largest bucket of money that is coming will be the Broadband Equity Access and Deployment project and really we don’t know how much money we are going to get as a state under this. We’ve heard anywhere from $500 million to over a billion dollars,” she said. “The reason we don’t know how much we are going to get is because it’s dependent on the number of un-served and underserved locations in our state, which brings us to why we are here today.

“We need the help of the Natchez-Adams County community because we need to know about the service you have at your residence. I think I know how it will look. I think we are pretty un-served down here in this area,” she said.

Doty’s office, by contracting with the company Ready.net, is creating the Mississippi Broadband Map.

“It will be an interactive map that will be constantly updated for the State of Mississippi and we are trying to get information from all of you in communities all over the state to put into the map,” she said. “We need anyone who has difficulty with their broadband, or if they have slow broadband or no broadband, to visit BroadbandMS.com. It’s a new website. We just launched it last week.”

Doty said when the BroadbandMS.com is entered, it immediately opens up to a home page and runs a test on the speed of the internet.

“In fact, it runs three speed tests. And it takes you through some survey questions about who uses Internet in your family and what you use it for. It’s nothing intrusive. We are not trying to get your personal information. The only place it is going is into our Mississippi Broadband Map,” she said.

“People all the time ask, ‘What can I do to help.’ This is what you can do. You can go to Broadband MS.com and take this speed test. We hope to have 100,000 unique visitors by the end of the year or the first week or so in January. We have some deadlines for trying to gather this data,” Doty said.

She also urged residents to take the test more than once.

“We are not trying to game the system or anything. What we want to do, though, is have the best data possible. So, if you take the test in the morning, you may have one speed, but if you take the test in the afternoon when the kids are home from school and are gaming and you are shopping online, you might have a different speed that shows up. So, we want you to take the test five or six times at different times of the day…We will get a true picture of what the speed is at your particular residence or location.”

If you do not have Internet access at your home or location, please call 601-439-2535 to report that for mapping purposes, Doty asked.