1,500 wreaths to be placed on Miss-Lou soldiers’ graves this weekend 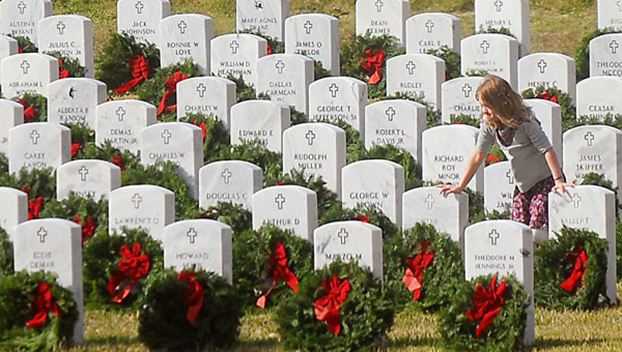 Each year wreaths are set in front of the grave markers at the Natchez National Cemetery as part of Wreaths Across America. (file photo)

NATCHEZ — There’s no record of how many wreaths were placed on soldiers’ graves during past Wreaths Across America ceremonies; but if there were, this year might break it, organizer G. Mark LaFrancis said.

LaFrancis said donations to Wreaths Across America in the Miss-Lou have increased “tremendously” over the last several months, allowing wreaths to be placed on approximately 1,500 graves throughout the Miss-Lou.

“This includes private sponsors, government entities and individuals and families and many who send us donations to sponsor any grave,” he said.

LaFrancis said last year, members of the newly created U.S. Colored Troops Monument Committee helped place the wreaths one day before the actual ceremony so those attending the ceremony could see them honored with wreaths already on the graves upon their arrival.

This year the monument committee and volunteers are expected to help again, with more wreaths than the 120 placed before the event last year, he said.

LaFrancis said 1,300 wreaths are expected to be delivered to the Natchez National Cemetery on Wednesday in the back of a semi-truck and be unloaded at approximately 3 p.m., rain or shine.

“Motorcycle riders usually come early to help out,” LaFrancis said. Motorcyclists are expected to depart from Walmart at 9:30 and ride to the Natchez National Cemetery to start putting out boxes of wreaths.

“We are several hundred above where we were last year,” LaFrancis said. “I believe we’ve hit a record. … I’ve been following this event for a long time. I believe this is our 12th year.”

During the ceremony, LaFrancis said he would also be honoring three buffalo soldiers and medal of honor recipient Wilson Brown, who at one time was enslaved.

“Wilson Brown is one that I will personally honor with a wreath,” LaFrancis said.

The wreath placement ceremonies have military components, including a posting of the colors, saying the Pledge of Allegiance and singing the National Anthem. There will also be a prayer and a speech from Veteran of the Year honoree, Ben Tucker, a retired army veteran, LaFrancis said. The first round of wreath placing on Saturday is for individuals sponsoring the graves of family members or loved ones. The second round of wreaths is for any graves left that aren’t already marked and placed by volunteers, he said.

“We usually start with the new graves because those are visible from the highway,” LaFrancis said. “Year to year we’ve had wonderful comments about how beautiful they look. Participating we have JROTC cadets, motorcycle riders, children and their parents. It’s nice to see young people come out and pay their respects to veterans who are buried there.”

Those who would like to volunteer during the wreath placements can call LaFrancis, or simply show up, he said. Check the “Home With Heroes” Facebook page for details or call 601-442-0980.

“If people want to make a donation to support our effort, they can still do that,” LaFrancis said, adding they can also call him or visit the donation page at homewithheroes.org.

“We’ll be recording the ceremony for replay later so anyone can watch,” he said. “It’s a wonderful, patriotic experience, especially for this time of year.”